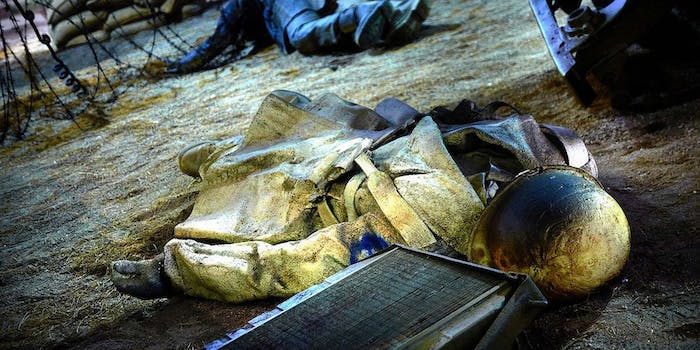 Dear white people, you have nothing to fear but Republican ideology itself.

Blast the air raid sirens, lock up your Vespas, and get the hell out of Portland! According to Republican Alabama congressman Mo Brooks, there is a “war on whites.” This is not a false alarm. Mr. Brooks was not delivering a laundry detergent endorsement with some particularly poor word choice. He actually believes that the Democratic Party is “launching” a political war on white people by perpetuating the idea that “whites hate everybody else.”

I remember once when my brother mistakenly threw a red shirt into the wrong laundry pile, creating a new pink sock wardrobe. #WarOnWhites

Turn down for whites RT @woodruffbets: Mo Brooks went on NewsmaxTV and doubled down on #waronwhites http://t.co/LG23M1S6Og

Obama’s lack of leadership during this Kale shortage is a clear sign of the #waronwhites.

The struggle is real, venti or trenta…. #WarOnWhites

Brooks first noted the existence of the “war on whites” on Tuesday, during an interview about immigration legislation with conservative talk radio host Laura Ingraham, who was herself unwilling to acknowledge the war that the Democrats are currently waging on white people everywhere. Yes, even Laura Ingraham, who earnestly believes that illegal immigrants are driving the spread of disease in the United States, has failed to notice that white people like Mo Brooks are in grave political danger.

“I don’t think [that’s] the best phraseology,” she suggested to Brooks, like a kindly tutor teaching a child how to express his racism more subtly. “They’re just playing the race card.”

Laura Ingraham might not have been fazed by Brooks’ characterization of contemporary U.S. racial politics but, when I first heard Brooks’ warning, I was scared. After all, I’m as white as the Swedish snow in which my grandmother was born. I’m so white that my Twitter handle is an Arrested Development reference. I love sushi and The Magnetic Fields and my bangs are longer than my face. I’m an archetypal white girl. If the Democratic Party was truly declaring war on white people, I needed to know where I stood and how I’d be affected by the conflict. Would I be the victim of this new political war? How much danger was I actually in?  I decided to do some research of my own in order to fact-check Brooks’ claims of war and here’s what I’ve turned up so far:

In terms of political power, white people still enjoy a level of dominance that far outstrips our raw numbers. According to a July 2014 report from the Congressional Research Service, there are only two black senators and four Hispanic senators in the 113th Congress. In terms of demographic percentages in the overall population, this means that African-Americans have less than a sixth of the representation they should have, and Hispanic people have less than a fourth. The U.S. legislative system is like a delicious pie, and non-white people only get to taste a sliver of their own pieces. Politically speaking, white people seem pretty safe.

What about the military, though? Surely a military with an anti-white agenda could handily overthrow a predominantly white legislature? They could manage that, sure, but not when the Joint Chiefs of Staff are about as white as a loaf of Wonder Bread. Not only are white people vastly overrepresented in officer ranks in the military, USA Today has also just reported that the “forced culling” of military officers is disproportionately affecting black majors, about 10 percent of whom will lose their jobs as compared with less than six percent of their white counterparts. Even at the active-duty level, white people are still overrepresented, albeit slightly.

Thus, if there ever were a literal “war on whites,” you can guess whose side the military would take, especially considering that the military is a group of predominantly white people who wage war for a living. War on whites? More like whites on war, amirite?

Might doesn’t always make right, through, and if William Randolph Hearst were still around, he’d remind us that public opinion rises and falls with the media. Perhaps non-white people have secretly taken control of the news media while white people were busy binge-watching Battlestar Galactica? Let’s check back in! The president of Fox News? Still a white guy. The president of MSNBC? Another white guy. The president of CNN? I’m beginning to sense a pattern… Even the talking heads who read the news to us on national evening news programs are all white. What do Brian Williams, Diane Sawyer, and Scott Pelley have in common? It isn’t a mutual love of spearfishing. White people have the propaganda machines on lock.

But in the immortal words of Cyndi Lauper: money, money changes everything. Money buys you political influence, money buys you weapons, money buys you television stations. If white people somehow lost their incredible wealth, everything else would surely follow. But that doesn’t seem to be the case. You can still play the world’s most boring drinking game by clicking through the Forbes 400 and taking a shot every time you see a non-white face. Spoiler alert: you’ll get carpal tunnel syndrome long before you get drunk. Recent studies by The Urban Institute, too, show that the wealth gap between white and non-white Americans is “not improving,” especially because “families of color were disproportionately affected by the recession.”

The conclusion of my research is this: there is no meaningful sense in which any group of people could conduct any kind of war against white people in the U.S. On the Monopoly board of life, white people have a hotel on every property. White people control the government, the military, the media, and the nation’s wealth. So unless Beyoncé and Oprah really are the queen bees of the Illuminati, white people still control the entire country. The phrase “war on whites,” then, like “reverse racism,” means nothing. It’s so impossible that it’s just a semantic void.

In the meantime, there is a real, concrete, tangible, and ongoing war being waged against immigrants to the U.S., a war that has only been exacerbated by Republican political maneuvering in recent weeks. Representative Michele Bachmann, for example, wants the United States to collect a “100 percent tax on remittances” that immigrants send back to Mexico in order to send a message to the Mexican government and “get [their] attention.” Texas Governor Rick Perry is ignoring the plight of unaccompanied Mexican minors who cross the border, choosing instead to invent ridiculous statistics about the numbers of homicides committed by illegal immigrants. It’s always been open season on non-white people in the United States and these latest episodes at the border are nothing but a continuation of that theme.

So one day after Mo Brooks announced the “war on whites,” I can officially declare that the “war on whites” is over, mostly because it never began in the first place. Republican lawmakers like Brooks would do well to choose their battles instead of inventing them.