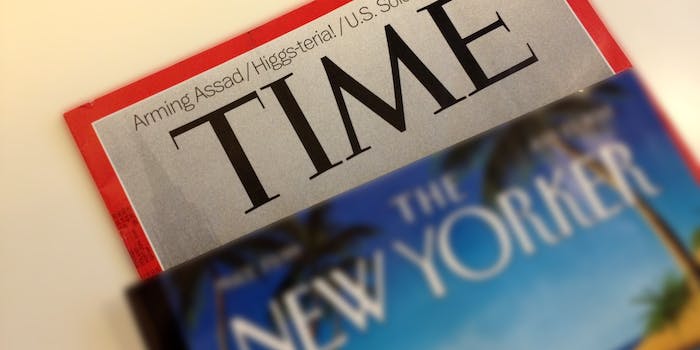 Time’s Person of the Year poll ends in defeat for hackers, Miley Cyrus

Despite millions of Twitter followers and the efforts of hackers, Cyrus couldn't win the poll.

It was a dead sprint to the finish for Egyptian general Abdel Fattah el-Sisi, Turkish Prime Minister Recep Tayyip Erdoğan, and singer Miley Cyrus. Having lead a good portion of the race, Cyrus was behind and doing everything she could to rally the crowd behind her.

In the end, it wasn’t enough.

Fattah el-Sisi has claimed the top spot in Time Magazine’s Person of the Year poll with more than 23 percent of the vote. Following behind him were Erdoğan with 20 percent and Cyrus with 16. 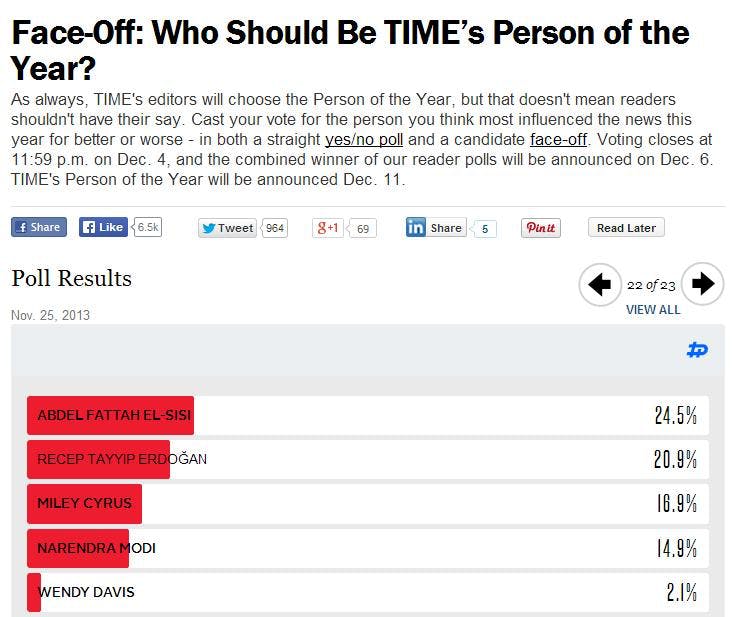 Voting closed at 11:59am ET Wednesday after two programmers, the 4chan community, and Syrian Electronic Army hackers had spent more than a week tampering with the online poll.

The tomfoolery began on Nov. 25 when a high school and college student exploited loopholes in the poll to get Cyrus to the top. The two programmers developed an automated program to cast votes on behalf of random Facebook users without their knowledge. While the duo coded late into the night, dozens of members of 4chan’s random imageboard /b/ and /g/, its technology board, were also creating their own scripts to rig the poll for National Security Agency (NSA) whistleblower Edward Snowden.

On the morning of Nov. 26, Snowden lead with more than 45 percent of the vote. By 2pm, he had fallen behind after Poptip, the company powering Time’s poll, learned of 4chan’s scripts.

“Time and Poptip are aware of the efforts to affect the results of the Person of the Year poll, and have measures in place so that only legitimate votes are being incorporated in the final tally,” a Time spokesperson said. “We’re delighted that so many people are having fun with this informal poll and contributing to the conversation [about who should win].”

An hour and half later, Cyrus was in first place. And it was just in time for the two programmers— a day later, Poptip closed the loopholes used to rig the poll. The security measures weren’t enough to keep out the Syrian Electronic Army, though.

On Nov. 29, SEA broke into Time’s Twitter account and wrote, “’Syrian Electronic Army’ was here via @Official_SEA16. Next time write a better word about the Syrian president #SEA.”

The SEA then allegedly shut down the poll entirely, outraged by Time’s description of Syrian President Bashar al-Assad. It reads, “Bashar Assad: Syria’s ruler presided over a bloody year, shrugging off international concerns over the use of chemical weapons as the death toll of his country’s civil war eclipsed 100,000.”

The SEA has become notorious for hacking media sites that portray the Syrian president in a negative way. This has included the BBC, NPR, and the Daily Dot.

As was the case with last year’s poll winner, North Korean leader Kim Jong-un, Fattah el-Sisi will likely be crowned the Reader’s Poll winner on Friday. Time’s Person of the Year will be announced Dec. 11. And chances are, neither three will win its coveted cover. That distinction will be determined by Time Magazine’s editors.

And with about 290 Time stories about Snowden this year, my bet is on him.