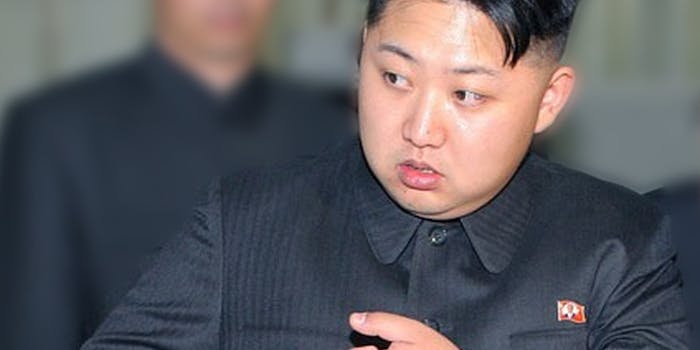 In the last two days, Kim, 29, has overtaken President of Egypt Mohamed Morsi for the No. 1 spot, with 2.9 million votes.

Kim trailed Morsi by about 60,000 votes early last week after users of 4chan’s /b/ imageboard—a random forum where people regularly post violent and sexual content—encouraged the community to vote for the newly crowned leader. Morsi is now in second place, with 389,000 votes.

“For our Glorious Leader, Episode II: We’ve already voted him to the top, now lets spell something nice with the first letters of the contestants.” wrote one anonymous 4chan user Thursday in a post that has since been deleted.

4chan hopes to spell “KJUGASCHAMBERS” with the first letter of every Time candidate’s name. It references the concentration camp near the border of Russia and China, used by the North Korean government. It is “where thousands of men, women, and children accused of political crimes are held,” the Guardian reported.

That same 4chan user also posted a script for people to download to automate the voting process.

While Kim does have a dominant lead, he will likely not win Time’s coveted cover.

“As always, TIME‘s editors will choose the Person of the Year (issue date December 31, 2012, on sale December 21),” the magazine says on its public poll. “The winner of the people’s choice for the person who most influenced the news this year for better or worse will be announced on December 14. Voting closes at 11:59 PM on December 12th.”

In 2009, 4chan pulled off a similar feat when helped its creator, Christopher “moot” Poole, top Time’s prestigious list. Since then, 4chan has gamed public votes for a new Mountain Dew flavor (one popular entry: “Hitler did nothing wrong”) and a competition to have Taylor Swift perform at a school for free.

The school 4chan decided to support was Boston’s Horace Mann School for the Deaf and Hard of Hearing, one of the oldest public schools of its kind in the county. The school was ultimately disqualified due to the way it received votes, but still received some great consolation prizes.

Swift herself gave the school a personal donation of $10,000, which was matched by the sponsors, as well as American Greetings and CoverGirl. Plus, VH1’s Save the Music program donated a fifth $10,000 gift in order to buy musical instruments for Horace Mann students.