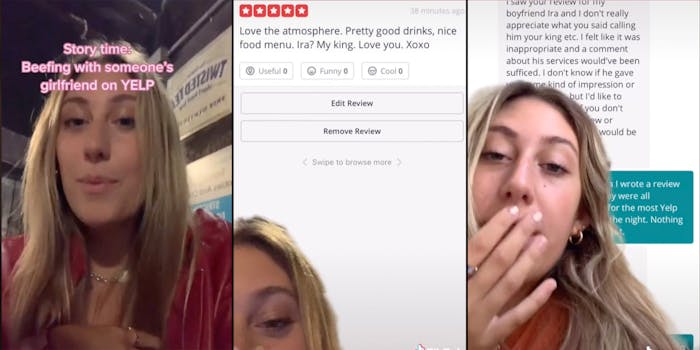 TikToker leaves ‘flirty’ Yelp review for her waiter, gets confronted by his girlfriend

The reviewer called Ira the Waiter 'my king.'

A TikToker posted a video discussing one pitfall of writing a positive Yelp review: If you’re too complimentary of the waiter, the waiter’s girlfriend might confront you about it.

The Tiktok user, who goes by @antoniaeveee, shared her story Thursday. The video, captioned “Story time: Beefing with someone’s girlfriend on YELP,” starts with her showing that she and her friends had just been at a restaurant where they were asked to leave a Yelp review by the waiter.

The TikToker obliged Ira the Waiter, starting with a straightforward, “Love the atmosphere. Pretty good drinks, nice food menu.” Then she playfully added, “Ira? My king. Love you. Xoxo.”

She then said in her video that 20 minutes after leaving the review, she received a message to her Yelp account… from Ira’s girlfriend.

His girlfriend scolded the TikToker with, “I saw your review for my boyfriend Ira and I don’t really appreciate what you said calling him your king etc.”

She then added, “I felt like it was inappropriate and a comment about his services would have sufficed. I don’t know if he gave you some kind of impression or was flirting etc. but I’d like to know.”

In addition to wanting a Yelp reviewer to rat out how flirty her boyfriend was, she requested, “If not then if you don’t mind editing the review or writing a new one, that would be great.”

The TikToker answered back, starting her response with “hahahahaha” and then assuring the girlfriend that “I wrote a review because they were all competing for the most reviews for the night. Nothing to worry about.”

She then responded, “It wasn’t about writing one,” but rather, “it’s about how it was written and perceived.” She then added, “But if it’s nothing, I apologize and enjoy the rest of your night.”

The TikToker noted in her video, after showing a screen shot of the conversation, “I didn’t want to be, like, you’re fucking crazy, but imagine going on Yelp to look at your boyfriend’s restaurant, and messaging someone from a review within 20 minutes.”

Commenters worried for Ira and thought the behavior raised red flags for his girlfriend, with one exclaiming, “TWENTY MINUTES LATER?! Does she get alerts for Yelp reviews at the restaurant or something?”

Another chimed in, “Ira is probably at home fighting for his life right now.”

At least one respondent understood where the girlfriend was coming from, noting, “She probably recently got cheated on and is going a little crazy,” adding, “I’ve been there.”

But one wanted to add a little more fuel to the fire, though, requesting, “Hey bestie, drop the restaurant so we can all leave reviews for our king Ira.”