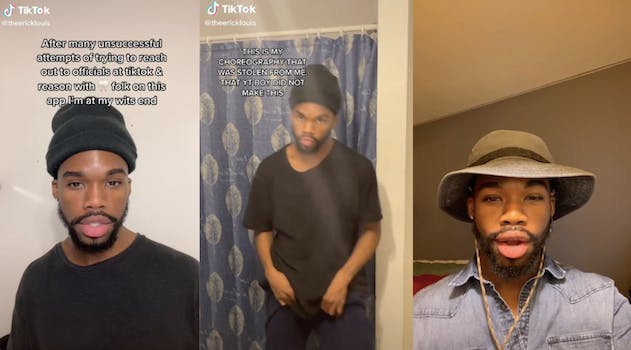 #SeeYouAtDaTop: This Black TikToker is protesting anti-Blackness on the app by stealing content from white creators

After attempts to talk to TikTok and white creators about the appropriation of Black content, Erick Louis is 'colonizing' white content.

TikTok is seeing more pushback from Black creators with the #SeeYouAtDaTop trend. Erick Louis, a popular TikTok creator with over 322,000 followers who is outspoken about the appropriation of Black content on the app, posted a video proclaiming that he will be stealing content from white TikTok creators. This proclamation follows the Black TikTok creator strike in June—which Louis was also at the helm of.

On July 12, he posted a video to TikTok that now has over one million views, saying that he tried speaking with TikTok representatives and reasoning with white creators about taking content without giving credit. After these unsuccessful attempts, Louis said that “as a form of protest, I will be stealing any and all content made by white folk on this app.”

He continued, “That means if you’re a white dancer or a white social activist who’s built social capital off of Black creativity and Black thought, your content is now mine—no credit, no tag.”

Louis encouraged other Black creators to join him in this movement “in an effort to shed light and bring awareness to the suppression and anti-Blackness we face daily on this app.” He ended the video by saying, “See you at the top.”

The three videos he posted after his proclamation are of himself doing popular TikTok dances and claiming he made the dances himself. In the comments section of one of the videos he “colonized,” he wrote, “From this point on, any content I ‘create’ (colonize) will be hashtagged with #seeyouatdatop so you guys can distinguish from my original content.”

Louis made another video recently to clarify why he’s “going after” all white content, not just from creators who are known for stealing content. He responded by questioning why “the same grace wasn’t afforded to Jalaiah Harmon and the multitude of Black creators who have had their content pillaged and stolen on this app?”

He continued, “It’s interesting to see this conversation of ethics, morality, and intellectual property takes place when it only affects white content creators when Black folks have been having these discussions since the virality of this app. If your response to my video is anything other than solidarity then you need to re-evaluate.”

The conversations surrounding content being stolen on TikTok have been occurring since the app began rising in popularity. Hence, when Black creators stood their ground in not making a dance to Megan Thee Stallion’s most recent song, “Thot Shit.” Louis made a video to the song out of jest and even that got taken by white people and repackaged as their own.

Louis did not immediately respond to the Daily Dot’s request for comment.