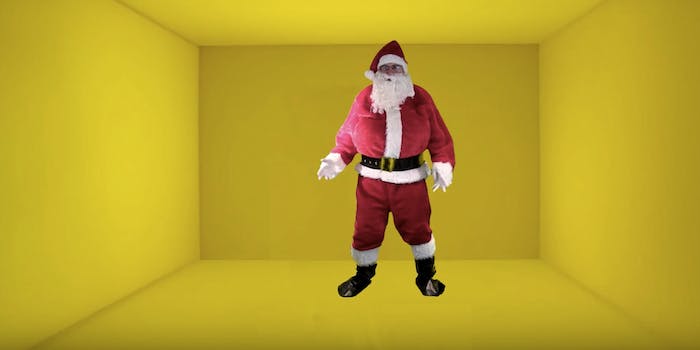 The 7 most unnecessary parody songs on the Internet

We didn't need these.

I have a feeling that most people discover the Internet’s colorful side through the art of the parody song. The “I Will Survive” alien, the Numa Numa guy—yeah, they aren’t parodies in the Weird Al sense, but they were early indications that the Internet didn’t have to be a boring place.

However, in 2016, with unlimited processing power hosting capabilities, the parody song has become a plague.

Well, not a plague—there are good ones—but ever since people discovered that getting rich off YouTube was a real possibility, the Web has been inundated with literally countless. Most of them are funny in that uninspiring way a half-assed Jack Nicholson impression is funny, but there are a few that make you question if the digital revolution was worth it.

Today, we’re looking at a few truly worthless, unnecessary parodies, in hopes that maybe our pain will inspire content creators far and wide to resist banality as best they can.

“Gangnam Style” was already a joke, right? Like, I know that it was authentically created in the fascinating K-Pop pipeline, but nobody was relating to Psy screaming at butts on a personal level. Isn’t parodying “Gangnam Style” like parodying Weird Al song? I don’t know, man.

There are millions of terrible, thirsty “Gangnam Style” cash-ins to choose from, but we’re going with vegan style, because, predictably, it’s a fucking polemic with all of the self-righteousness and none of the humor—which is exactly what you expected. One of the lines here is “time to realize your vision has been blurred.” Yeah, you’re going to turn a goddamn “Gangnam Style” parody video into pious, woke-as-fuck carnivore shaming. Fuck you, and this is coming from someone who’s read Eating Animals.

2) “The Declaration of Independence” (“Can’t Feel My Face” Parody)

The thing about doing a parody song is you have to have an actual idea.

Signing the Declaration of Independence to the tune of “Can’t Feel My Face” doesn’t count as an idea. Don’t get me wrong, it’s funny to watch any man struggle to fit “a long train of abuses becomes despotism” into a fucking Weeknd verse—even so, you’re left wondering… why.

You’re doing the absolute least amount of work to create a YouTube video, but I guess that barely matters in 2016.

This is my least favorite video of the bunch, because it totally epitomizes everything wrong with content.

There’s this dude Bart Baker who has made his name off parody songs of literally every single thing that achieves even a mild amount of Billboard success. They aren’t awful. Yeah, the jokes aren’t great, but it’s a helluva lot more produced than what you’re usually going to find when you type “Work parody” into YouTube. A fake Rihanna makes jokes about her voice, a fake Drake makes jokes about his softness (HAHA! GOT ’EM!), and yeah, it’s pretty by-the-book.

But then, in the third act. Deadpool shows up. For no reason. He does a thing, and then the video ends.

Unless I am sorely mistaken, I’m pretty sure Deadpool isn’t mentioned by Rihanna or Drake in “Work.” He’s included simply so my boy Bart can put a Deadpool in the thumbnail and get silly children across the universe to offer their clicks. It’s the thirstiest shit ever, and I hate it. YouTube should be a place where true, unadulterated creative talent can shine through all the bullshit surrounding the movie industry. Instead its creators how to bow down to comic book cameos for better metrics. That sucks!

“Hotline Bling” might be the most ubiquitous pop-culture artifact of the 21st century. I don’t say that lightly, but nothing, not “Empire State of Mind,” or “Get Lucky,” or “Blurred Lines” came close to the summer of 2015. And props where props are due: It’s a timeless song with an iconic music video—the parodies were inevitable. So maybe I shouldn’t be infuriated by this.

But seriously, Santa Claus doing “Hotline Bling?” The best parodies make some sort of unifying cultural, political, or satirical commentary, and I know I’m asking for a lot, but this must’ve been the laziest creative meeting ever.

“So, what do we got for Friday’s video?”

“Um, I’m thinking about dressing up as Santa Claus and doing ‘Hotline Bling.’”

Fuck, man, couldn’t it have at least been a Breaking Bad take or something? That’s equally tired, but it’s not as immortally trite as Santa Claus.

This points to a problem I wasn’t aware of until I wrote this story.

Guess what, kids? Literally every pop song has a Minecraft parody. I’m not joking. I’m featuring “Get Crafty” because it only rhymes about four times and it’s riffing on a song that’s explicitly about fucking. Great! Also, why do 9-year-olds love Minecraft so much? It’s become the Kidz Bop filter for the Internet.

I generally understand why most self-respecting people roll their eyes at the insanely popular “Epic Rap Battles of History” series. I mean, it’s really, really hard to sell “rap battles” as a not-completely-played-out concept in 2016, especially considering we’ve lived with “Star Wars Gangsta Rap” for some 15 years now. However, I do think they’re better-written than most of the flotsam on YouTube, and I’m not going to pretend I don’t dig a “you tried to plant a new German psyche /but you just grew hate me no Third Reich-y” Nietzsche dig. But that’s all besides the point, because we’re talking about the channel that parodies Epic Rap Battles of History.

Yep. Epic Rap Battle Parodies steals their entire format and calls it a parody. See for yourself.

I think this is the best example of how completely useless the term “parody” has become in 2016. Kids, a parody needs to be a humorous, illuminating take on the source material. It’s in the fucking Constitution. Parody does not mean “do the exact same thing as someone else for sweet YouTube traction and hope you don’t get sued.” Let’s… let’s just think about what we’re doing before we click “upload,” OK? Please?

Look, you don’t need a blogger to make fun of a Minions parody of a Frozen song for you. I’m not here to question your incisiveness. However, I will say that this appears to be sung by a 12-year-old in their absolute best Minions voice, and it almost makes me cry. Good luck!