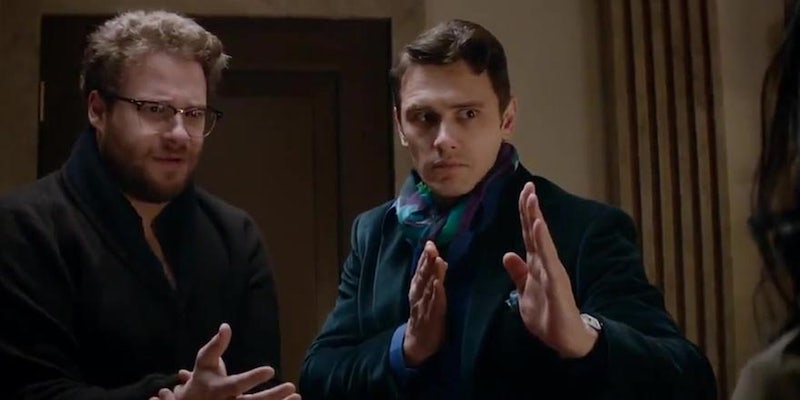 It's not just OK to joke about the removal of a North Korean dictator. It might be healthy.

Say what you will about The Interview, but let’s abandon the notion that the filmmakers were wrong for their fictionalized depiction of Kim Jong-un’s death. The reason is simple: It is healthy to assert that Kim Jong-un deserves to die.

Kim Jong-un is not just some interchangeable foreign leader. This is a point critics, like Justin Moyer of the Washington Post, partially acknowledge, conceding that “it’s impossible to summon much sympathy for Kim Jong-un,” before urging his readers to “imagine this assassination farce was made not in Hollywood, but in North Korea or Moscow, and the leader assassinated in the film was a president of the United States. Or imagine the film was made by Iran, and the leader assassinated in the film was the prime minister of Israel.”

Dean Obeidallah offered a variation of this thinking on CNN when he criticized right-wingers as hypocrites whose defense of The Interview was “hollow pandering,” since, after all, they’d expressed outrage over the fictionalized depiction of George W. Bush’s assassination in the 2006 British mockumentary Death of a President. Amy Nicholson of LA Weekly, meanwhile, observed that North Korea didn’t care about Olympus Has Fallen, which depicted a North Korean attack on the White House, because it didn’t have the “goal to debase him and humiliate him” (Seth Rogen’s quote, not hers). “Fear is fine,” she insists, “but humiliation means war.”

Ironically, it’s entirely possible that The Interview is more geopolitically responsible than its critics anticipate. As the leaked Sony emails reveal, Bruce Bennett, a senior defense analyst at the RAND Corporation who specializes in North Korea, actually felt The Interview might have a positive effect on the Korean peninsula, since “a story that talks about the removal of the Kim family regime and the creation of a new government by the North Korean people … will start some real thinking in South Korea and, I believe, in the North once the DVD leaks into the North (which it almost certainly will).”

In terms of its message to domestic audiences, we can turn to Richard Brody’s review in the New Yorker, which describes The Interview as “a post-9/11 and, especially, a post-Iraq War meditation on a pre-9/11 theme,” specifically, “at what point is an act of war—because, of course, that’s what the planned assassination is—justified?” If Brody’s summary of the plot is correct, the film goes to extraordinary lengths to have their fictionalized version of Kim Jong-un winds up posing a direct existential threat to the United States. “Rogen and Goldberg offer a comedic dramatization of a political principle that would pass muster over craft beers in a liberal barroom,” he concludes, namely that “the killing of a foreign leader, or an act of war, would be justified if and only if an attack were verifiably imminent.”

For the sake of argument, however, let’s assume that Bennett and Brody are completely wrong. Even if The Interview is just a half-baked buddy comedy with little serious foreign policy thought at all, we still need to remember something very, very important: This isn’t Zoolander having fun with the idea of assassinating the Prime Minister of Malaysia or, again, Death of a President (which Moyer covered in a separate recent article but, tellingly, did not offer personal commentary upon). Even in a world in which America tortures innocent people in the name of a war on terrorism, Israeli bombs snuff out Palestinian refugee lives in the Gaza Strip, and Vladimir Putin attempts to gradually recreate the Russian empire, Kim Jong-un still belongs in a class all of his own.

We must never forget that North Korea has consistently ranked among the world’s worst violators of human rights. As a United Nations report put it earlier this year, “we are in the position to in fact directly put culpability on the supreme leader for these massive human rights violations,” including ordering the suppression of political dissent, torture, massive starvation, and murder. “Eighty-four percent [of North Koreans], according to the World Health Organization, suffered from borderline malnutrition last year,” explained Sue Terry, a former CIA analyst who specialized in North Korea, during an interview last month with Fox News, “There are 120,000 that are sitting in Soviet-style gulags, and they were consigned there for political crimes, not real crimes.”

Now to pose a series of questions akin to Moyer’s: Would there be a moral outcry if a comedy depicted the on-screen death of a notorious serial killer while he was still alive—e.g., Ted Bundy, Jeffrey Dahmer, John Wayne Gacy? What about a movie that did the same for a mass murderer—e.g., Charles Manson, Lee Boyd Malvo (one of the two “Beltway Snipers”) or James Eagen Holmes (who is currently under consideration for the death penalty for his involvement in the Dark Knight Rises shootings)?

While some might be offended on those occasions because of a broader theoretical belief in the sanctity of human life, it’s inconceivable that there would be any kind of meaningful editorial backlash against it, and for a reason we often don’t consciously recognize: We elevate political leaders, particularly when they rule entire countries, above the rest of the population. Even the ones we detest, like Kim Jong-un, are still assumed on some level to be ineffably “different” from ordinary citizens.

In a hypothetical movie showing the death of a real and living serial killer or mass murderer, only the heinous acts themselves are perceived as being attacked; apply the same treatment to a political leader, however, and people may perceive (rightly or wrongly) that you are attacking that leader’s entire country and/or the very institution of government itself. Consequently, a man like Kim Jong-un is treated differently than a common mass murderer, even though he is without question responsible for exponentially more deaths than Bundy, Dahmer, Gacy, Manson, Malvo, and Holmes combined.

Of course, there are still potential problems with how The Interview might have handled its subject. As S.E. Smith, my colleague at the Daily Dot, pointed out in an editorial on Friday, America has a long tradition of emasculating and “othering” Asian males for comic effect. When we ridicule Kim Jong-un using racist stereotypes about Asian men, the victim is not Kim Jong-un himself, but the 25 million North Koreans who languish under his rule. Without seeing the film to assess its nuances, one can’t be entirely sure if these racist tropes are used in The Interview. But if the movie commits this offense, it should be condemned for using that tool.

Perhaps one way of testing this would be to see how much energy the film invests in skewering Kim Jong-un for his qualities as a dictator (a la Charlie Chaplin with Adolf Hitler in The Great Dictator) versus how much it does so for adhering to racial stereotypes (a la Trey Parker and Matt Stone with Kim Jong-il in Team America: World Police). There is no reason for it to use the latter at all, quite frankly, and if it does, the movie will have tainted its ostensibly noble objectives.

Insofar as the question involves whether we should feel comfortable depicting the death of a real-life despot, however, the answer must be clear. Once a nation’s leader does certain terrible things, he or she forfeits their right to the respect inherent in their office and are fair game to the same pop culture characterizations we might bestow on anyone responsible for similar crimes. Indeed, humanity will be better served by severing Kim Jong-un, individual human being, from any identification he currently possesses as a valid representative of his people or a symbol of a respectable form of government. Kim Jong-un’s atrocities may not be sufficient grounds for America to go to war with North Korea, but they are sound cause for our culture to arrive at the conclusion that his authority should be delegitimized.

The moment we fail to state that as fact, we surrender something more important than our national security, more precious indeed even than our First Amendment rights. We surrender our souls.