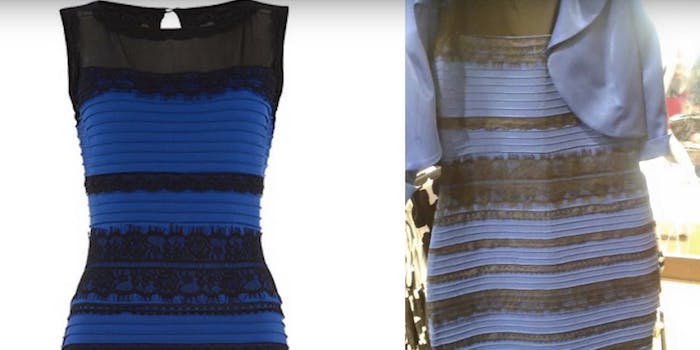 A year ago today, on Feb. 26, 2015, the Internet enjoyed a live broadcast of a llama chase in Arizona. The content mill came to a virtual standstill as all of us tuned in to root for the escaped ungulates. It was a most rare occasion in the media realm: a pleasant afternoon.

One year ago today, the NFL Draft's greatest prospects were introduced to the world. #FBF https://t.co/ze2GK7Q5dn

Naturally, it couldn’t last. That evening, websites latched onto the unexpectedly divisive question of whether a dress making the social-media rounds was black and blue or white and gold. Everyone had to weigh in.

It happened 1 year ago today, and changed our lives forever. #TheDress https://t.co/FjkFAPmvie pic.twitter.com/FgbdpcJHdV

So, which do you think it is?

#TheDress debate was the result of unfiltered content meeting a viral vacuum, and on the anniversary of its explosion, BuzzFeed is trying to manufacture a sequel. But it won’t work—as long as you don’t click.

A year ago today, we were all arguing over #TheDress. Which side were you on? https://t.co/8u2xzEb0nU

Cynical as #TheJacket is—“What is it about Feb. 26 and weird optical illusions?” the BuzzFeed post asks, as if it were a matter of coincidence and not a transparent effort to line the dates up—it’s almost better than the other thirsty engagement plays we saw.

A year ago today, The Dress murdered the idea of objective colors https://t.co/AuXAFlpboc pic.twitter.com/NjoKCJ2ZlM

#TheDress one year on – eight things we learned from the viral phenomenon https://t.co/LRXKV2cjMZ

The article you’re currently reading is, of course, no different. The Daily Dot cannot ignore the legacy of #TheDress any more than its competitors can. We needed to add to the existing archive of 31 stories we’ve so far published about or in reference to this unholy trash garment.

And for that we are sorry. Because, once again: #TheDress doesn’t matter. It’s a phantom issue, a distraction from the dialogues that will further advance our species. Worse than that, it is a bad meme.

Are we doomed to forever analyze this disastrous confluence of perception and boredom? Yes.

What can we do? Great question.

I’d start by putting down your phone or closing your laptop. Then go hug someone you love—as tightly as you can. Finally, you’ll want to tear off all your clothes and run off toward the nearest highway.

Seemed to work for the llamas.