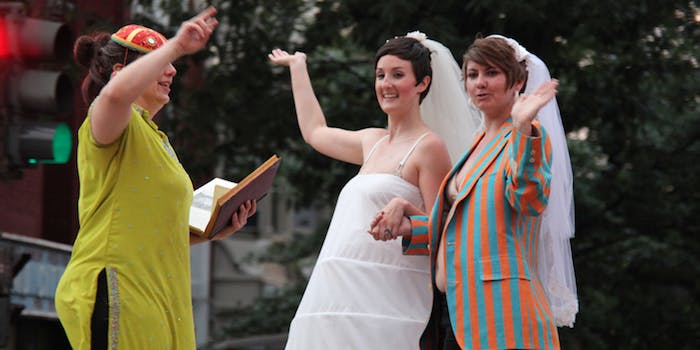 The case against marriage

It's time to get out of the wedding business.

An Alabama Supreme Court justice is threatening to hold the institution of marriage in his state hostage over a marriage equality mandate, while the debate over the legal recognition of relationships rages on- and offline. Justice Glenn Murdock suggested that if the state recognized same-sex marriages, his court would strike down all marriages—gay, straight, and otherwise—across Alabama. While the motivations behind his threat might be wrong, he could actually be right in the long term: Maybe it is time to ban marriage.

Marriage equality has been an important cause among some groups within the LGBTQ community in recent years, especially middle-class gay white men. It’s also become a heated cause for conservatives determined to go against the inevitable winds of change. However, the nature of legal recognition for loving partnerships is worth discussing, because it’s possible that marriage isn’t the best solution.

Perhaps the state needs to get out of the marriage business.

A casual stroll through the Internet will reveal a host of anti-marriage equality sites, many of which push a set of familiar arguments: Marriage is a relationship between a man and a woman, marriage begets children, children do better in a married household with their biological parents, and requiring states to recognize marriages is a violation of the Full Faith and Credit Clause, representing a federal imposition on individual state values.

Contrary to popular belief, same-sex marriage isn’t a modern invention. Historic evidence places same-sex marriages in ancient China, Greece, Rome, parts of Africa, and Mesopotamia. If anything, the limited definition of marriage as a relationship between one man and one woman is a more recent development. Notably, such relationships were prevalent enough in ancient Rome that the Theodosian Code of 342 CE specifically banned it and mandated the death penalty for couples in same-sex marriages. So much for biology and the force of history.

If the argument in support of heterosexual marriage is primarily about children, it’s worth a reminder that marriage doesn’t necessarily result in children. Heterosexual couples don’t always have or want children, and we would consider their marriages entirely legally valid, as would many of their churches; the state certainly isn’t in the business of dissolving marriages that haven’t resulted in progeny. Some couples even choose to adopt, which brings up a direct argument against the claim that children do better with their biological parents.

In fact, researchers have conducted substantial explorations on adoption and parenting. Research published in the American Sociological Review showed that adoptive parents invest more in their children than birth parents, suggesting that children brought into a family via adoption benefit just as much as biological children, with their parents taking their role extremely seriously. The researchers found that “individuals who are not granted the title of ‘parent’ via biology may actually fulfill (and even exceed) the accompanying expectations better than those who have been accorded this title.”

There’s also no particular indicator that children do better in married households. What’s more important are socioeconomic factors: Children living in poverty with married parents, for example, have more social disadvantages than those born to or adopted by wealthy single parents. The issue isn’t family structure, in other words, but about poverty and class. Married parents, biological or not, boast dual incomes, and higher incomes, because they tend to marry older, and college graduates are more likely to get married. The correlation between marriage and better outcomes is not actually evidence of causation.

As for the gender of the parents involved, a frequent target of anti-marriage-equality defenders, studies indicate that children growing up with LGBTQ parents tend to be as well-adjusted and happy—if not more so—as their counterparts. If marriage is all about child welfare, we should perhaps be agitating for a ban on heterosexual marriage, if the children of same-sex couples appear to have moderately better outcomes. After all, we should be thinking of the children.

When it comes to the Full Faith and Credit Cause, often dredged up to support conservative policies, the issue has been made clear by Congress, various presidents, and the Supreme Court on a number of occasions: The federal government has cause to act when warranted to protect the interests of the nation. The Civil Rights Act of 1964, for example, specifically abolished discriminatory tactics in the interest of honoring equality and justice in the United States. Likewise, the Americans with Disabilities Act moved to protect disabled people from state-by-state discrimination in 1990.

A number of federal laws, in fact, have been put in place for commonsense reasons as well as those related to civil rights. While individual states do have the right and ability to act as they see fit on a number of legal matters, civil rights should be nationally consistent. The Declaration of Independence, a sacred document in American governance, clearly said so.

The arguments against the legal recognition of same-sex marriage are confusing two different things: a legally recognized partnership and a marriage. Legal partnerships are important for couples who want to be able to make medical decisions for each other, access benefits through work, file taxes jointly, and handle other legal issues as a couple. There are certain advantages to being in a clearly legally recognized relationship; for example, if a couple lives together but is not married and one partner is seriously injured, the other partner may not be able to visit in hospital, let alone make medical decisions.

A marriage, on the other hand, is a community recognition of a relationship. Marriages can take place in a variety of faiths or in a purely civil sense, bringing the parties together to celebrate their partnership and present themselves to the community as a couple. Legal and social recognition are splitting apart more and more in modern society, in part because some critics have serious misgivings about the history of marriage as a legal institution—as a tool for exerting ownership over women, for example.

States are absolutely in a position to legally recognize partnerships and should be doing so. Marriages, however, should be conducted as private affairs outside of a state context. Private ceremonies offer an opportunity to customize a ceremony and determine the specifics independently. They also create a framework for allowing individual officiants and religious cultures to make their own decisions about the kinds of marriages they will recognize and perform. A conservative Baptist church, for example, might opt not to recognize same-sex marriage and would therefore refuse to perform ceremonies in the unlikely event LGBTQ couples approached a minister to ask about marriage services.

By all means, let’s ban marriage. It’s absolutely right for states to switch to a model of civil unions for all, while allowing individual couples to choose how, when, and if they get married. People should be able to obtain legal recognition for their partnerships without necessarily conducting marriage ceremonies, and conversely, people who want to celebrate their relationships without legal recognition should feel free to do so as well.

These rights should be extended equally to all; the state should not be making statements about who should be married, as this isn’t relevant to governance in the slightest.