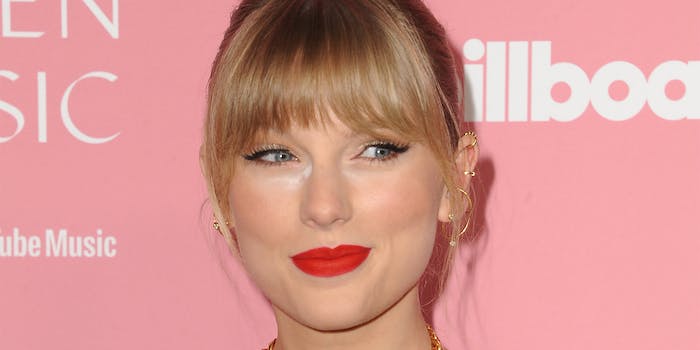 A spokesperson clarified that Swift wasn't on most of the flights.

A new report crowned Taylor Swift as the celebrity whose private jet took the most flights this year, a revelation that both seemingly clashed with the perception of Swift as an eco-friendly celebrity and launched dozens of memes into the sky.

The report, published on July 29, came from Yard, a marketing firm focused on sustainability, and the report was partly sparked by the recent backlash against Kylie Jenner and Travis Scott for joking about which of their private jets they should take for a flight, along with Jenner using her private jet to take extremely short flights instead of driving. For critics, the issue with Jenner’s frequent private jet usage was the vast amount of carbon emissions generated from those flights, leaving a much bigger carbon footprint than the average person.

Yard obtained the data for its study from the @CelebJets, a bot Twitter account that posts whenever a celebrity’s private jet takes off and lands—and stats like how many gallons of fuel were used and the flight’s carbon dioxide (CO2) emissions—data which is obtained from ADS-B Exchange. And by looking at the flights taken between Jan. 1 and July 19, 2022, Yard determined that Swift was the worst celebrity offender. (Scott landed at number 10 while Jenner ranked 19th on Yard’s list.)

“Taylor Swift might be today’s pop princess, but Yard’s research found that Miss Swift is the biggest celebrity CO2e polluter of this year so far,” the report stated. “Racking up a total of 170 flights since January, Taylor’s jet has amassed a vast 22,923 minutes in the air—15.9 days. Quite a large amount considering that she is not currently touring.”

Swift’s representatives pushed back at the notion that Swift was directly responsible for all 170 flights this year.

“Taylor’s jet is loaned out regularly to other individuals,” a Swift spokesperson told Rolling Stone. “To attribute most or all of these trips to her is blatantly incorrect.”

An updated version of Yard’s post included a disclaimer (which wasn’t in the original report) acknowledging the statement from Swift’s rep and noted that “whilst there is no way to determine if these celebrities were on all the recorded flights the purpose of this study is to highlight the damaging impact of private jet usage.”

Since the report’s release, people have found a source of amusement in imagining exaggerated examples of Swift (and sometimes other celebrities like Jenner or the Kardashians) using a private jet for trivial matters, often accompanied by GIFs or photos of planes.

But they also found amusement in picturing Swift’s reaction to getting the jet taken away.

Others pointed out that while celebrities like Swift having private jets and using them to excess isn’t great for the environment or the planet amid a climate crisis, they’re far from the worst offenders of carbon emissions; many of the worst offenders come from power plants and other refineries.

Swift’s private jet has taken several more flights since July 19, according to @CelebJets. The most recent flight was on July 30.