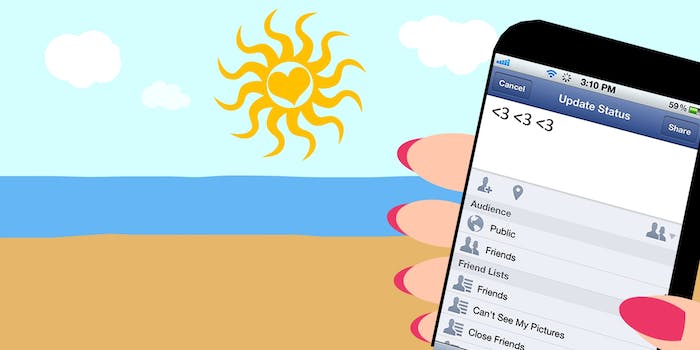 Tangled Web: What are my social media bragging rights for a summer of love?

I met a friend of a friend through Facebook and came down with a crush on him even though he lives like 10 states away. After some Facebook flirting, we met, we boned, we met again a few months later, and that time we didn’t bone because I was too chicken to say “I lost interest in you but I don’t know why but you’re really cool and it’s awkward because we have this mutual friend.” I finally developed the labia (I dunno, what’s the lady-version of cojones?) to apologize for vanishing into the ether, and he’s cool so he’s not pissed. Now we’ve both moved on—he keeps posting pics of ladies to his Instagram, and I’ve been on a handful of great dates with someone. I have that urge to make vague but triumphant status updates about getting laid…but I don’t wanna shove it in this guy’s face.

How do I navigate the tentative early-relationship stage via social media without being a dick? (I know it might not even last, so there’s that too.) Between Facebook, Twitter, and Instagram, it’s not possible to hide a “SUMMER LUV BITCHEZ” type post from him everywhere.

I’m not sure if this is the only ex you’re social-media friends with, or if this one is just more sensitive because it’s recent and because you feel bad about doing the slow fade, even if things are cool now. A lot of people try never to be Facebook (etc.) friends with their exes, even if it was casual, for exactly this reason. But if you met someone on social media initially, the process of un-friending may feel more fraught, and stand as your last resort. 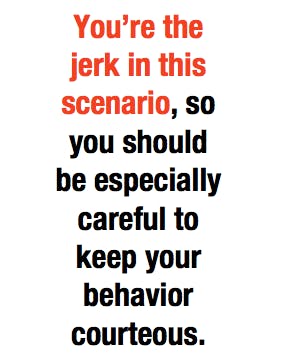 Actually, you should be thankful that this is making you more reticent about posting your sexual exploits. There’s not a friend on your list who won’t thank you for that, unless, I guess, your sexual exploits are unusually entertaining. But if you guys only had a handful of offline make outs, you’ve apologized, he’s accepted, and it’s been long enough that he seems to have moved on, you probably don’t need to worry overmuch about sparing this guy’s feelings in particular (as opposed to just being generally considerate about what your friends may or may not want to hear).

If you had been the wronged party here, I’d say you deserve a small number of free passive-aggressive sub-tweets, which you should obviously not use and instead bank against getting into Silicon Heaven. But you’re the jerk in this scenario, so you should be especially careful to keep your behavior courteous. That means no posts like, “Here’s my sweetie, it sure is great that he lives in my town instead of 1,000 miles away!” or, “My new boo is so hot that I would never stop contacting him for no reason!” Whatever you do, you definitely should not post pictures of his nostrils.

All this doesn’t mean you can’t mention the fact that you’re seeing someone, or post pictures of him, or whatever you’d normally do that is within the bounds of good taste. You guys are grownups (I hope you are grownups! Please don’t travel 10 states to bang if you are not grownups), you’ve put your fling to bed as best you can, and if he can’t handle it, he can always hide you.