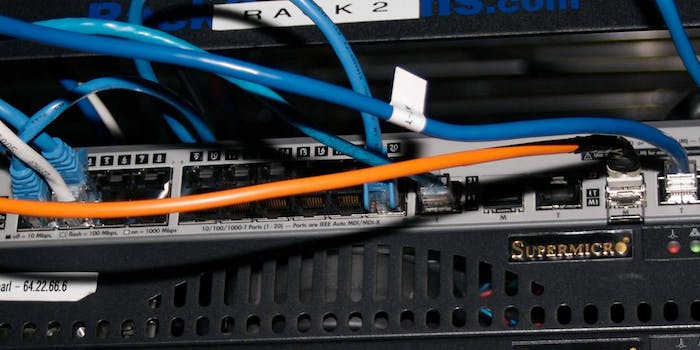 The pro-Assad hacker group has apparently lost its government support, and will have to look for web hosting elsewhere.

The Syrian Electronic Army, that mysterious group of hackers that briefly tanked the Dow Jones by hijacking a Twitter account, has seemingly been cut off by its government.

The unabashedly pro-government SEA announced Thursday evening that the Syrian Computer Society (SCS), which regulates Syria’s domain names and possibly shuts off the country’s connectivity entirely in times of duress, had severed ties with the hacker group.

“SCS stopped our website hosting on its servers,” one member of the SEA told the Daily Dot.

The Syrian government, currently embroiled in a civil war with rebels, has long maintained an unclear alliance with the SEA. Syrian President Bashar al-Assad once headed the SCS, who provided some of the SEA’s early members, and Assad previously had referred to the SEA as “a real army in a virtual reality.” But, save those references and the fact that the country had granted the hackers a .sy domain name—a top-level domain exclusively issued by the SCS— there wasn’t an explicit connection between the SEA and Assad’s regime.

“No, we are not supported by anyone or part of the government,” a high-ranking representative for the SEA previously told the Daily Dot. “We are just Syrian youths who want to defend their country against the media campaign that is full of lies and fabricated news reports.”

The SEA’s attacks have tended to be quite simple, but they excel at grabbing headlines. Their standard operating method is to trick a member of a media outlet into revealing their company name and password, then impersonate that person to trick coworkers until the SEA can control that outlet’s social media operations. That’s led to a host of hacks, ranging from joking about Syria’s enemies on the Onion’s Twitter feed to hijacking the AP’s account. That one convinced followers President Obama had been attacked, which caused the Dow Jones to briefly drop 145 points.

For now, the SEA is without a home. Until mid-April, the group had an official .com site. But according to remarks made by the SEA representative, on April 10, that site was among the hundreds of Syrian .com, .net, and .org domains seized by a firm based in the U.S., likely under U.S. government orders.

That would explain why the SCS gave the SEA the sea.sy domain, which it has now revoked.

The SEA isn’t calling it quits, but it is currently homeless. Its Twitter accounts are regularly banned, though the hackers have no trouble just creating a new one (they’re currently on @Official_SEA12).

“Our website will be offline for a little time while we find a hosting company that accept hosting our website on it’s servers,” the SEA representative said.