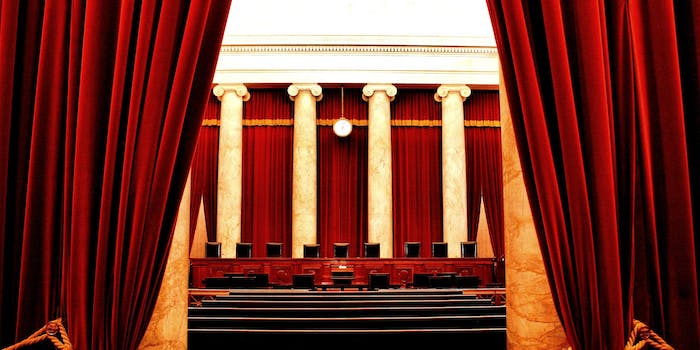 The next Supreme Court justice and the future of the Internet

How will the next Supreme Court justice affect Internet freedom?

When it comes to the field of cyber law, it’s rather ironic that the next Supreme Court justice will replace the late Antonin Scalia. After all, the famous constitutional originalist revealed in 2012 that, if he had his druthers, his successor would be University of Chicago law professor Frank Easterbrook, a man who once compared studying Internet law to creating a hypothetical field in “horse law.”

“Lots of cases deal with sales of horses; others deal with people kicked by horses; still more deal with the licensing and racing of horses, or with the care veterinarians give to horses, or with prizes at horse shows,” Easterbrook argued. “Any effort to collect these strands into a course on ‘The Law of the Horse’ is doomed to be shallow and to miss unifying principles.” So too, he claimed, with the Internet.

Not surprisingly, Easterbrook isn’t on President Barack Obama’s short list to replace Scalia, in large part because his self-proclaimed “originalist” views differ so widely from those of the liberal Democratic Party. Fortunately, several of the other judges and lawyers reportedly being considered by the president do have backgrounds in cyber law, stretching beyond merely dismissing it as the modern equivalent of equine jurisprudence.

As Republicans and Democrats argue over whether the White House should wait until a new president is sworn into office next year, Obama has made it clear that he will nominate a replacement soon.

As Republicans and Democrats argue over whether the White House should wait until a new president is sworn into office next year, Obama has made it clear that he will nominate a replacement soon.

First on the list is D.C. Circuit Court Judge Sri Srinivasan, who is widely regarded as a frontrunner to replace Scalia. Although his views on net neutrality aren’t well known, they will soon become very important to the fate of the Internet. In December, Srinivasan joined a panel with fellow judges Stephen Williams and David Tatel to determine whether Internet providers can be legally permitted to favor preferred websites when consumers surf the Web on their personal computers, smartphones, and tablets. Tatel has already demonstrated an opposition to net neutrality, having authored opinions striking down the FCC’s attempts to enforce net neutrality on two previous occasions, which means that Srinivasan’s views on the subject will be particularly important.

More disturbing are the views of U.S. Attorney General Loretta Lynch, who is also reportedly on Obama’s short list. Lynch has been an unapologetic supporter for the NSA’s surveillance excesses. Speaking with CBS News in May, Lynch warned that the United States would be “less safe” unless the NSA had broad-reaching powers to monitor Americans using telephone records and information about their Internet use. “I think that we lose important tools. I think that we lose the ability to intercept these communications, which have proven very important in cases that we have built in the past,” she explained. “I am very concerned that the American people will be unprotected if this law expires. I’m hopeful, however, that Congress, who I know is working on this issue, will come to a resolution.”

By contrast, California Attorney General Kamala Harris seems to have a strong appreciation for the importance of online privacy. Although she hasn’t been involved in deciding NSA policy, she has been a staunch protector for consumers in her state who don’t want their personal information collected and passed onto buyers who specify their marketing based on this individual data. These have included sending notices to 100 app makers in her state who hadn’t heeded disclosure guidelines, suing Delta Airlines for collecting personal data without fully informing their users, and urging that app makers not ask for personal data when it’s not essential for basic functions. “These are challenges that we must confront and that we must resolve in a way that appropriately protects privacy while not unduly stifling innovation,” Harris told CBS News, recognizing the importance of app development to our economy while insisting on the right to privacy.

Issues ranging from national security and copyright infringement to protecting privacy and curbing the power of big business have intersected with cyber law and how it ought to be conceived and implemented. As the Internet becomes more and more prevalent in our social, political, and cultural life, these questions are only going to multiply.

Finally, we can look at Minnesota Sen. Amy Klobuchar, who represents how the views of individual policymakers can evolve over time on these issues. Back in 2011, Klobuchar joined 11 other senators in co-sponsoring the Protect IP Act (PIPA), which along with the Stop Online Piracy Act (SOPA) in the House was written with the goal of stopping “rogue websites dedicated to infringing on counterfeit goods.” After becoming aware of her constituents’ concerns that PIPA and SOPA would stifle creativity under the guise of protecting copyright holders, however, Klobuchar’s office walked back its support for the bill. “[Klobuchar] believes we need to address concerns being raised today and work out a compromise that balances free exchange on the Internet with stopping foreign piracy that hurts our economy,” her staff explained.

There are several advantages to reviewing the records of Srinivasan, Lynch, Harris, and Klobuchar on Internet law. Along with representing very different points on the spectrum of American legislative/judicial life (being, respectively, a circuit court judge, a federal attorney general, a state attorney general, and a federal senator), each one has been required to confront thorny issues about how the Internet fits into the modern legal system. Issues ranging from national security and copyright infringement to protecting privacy and curbing the power of big business have intersected with cyber law and how it ought to be conceived and implemented. As the Internet becomes more and more prevalent in our social, political, and cultural life, these questions are only going to multiply.

Does this mean that Easterbrook was right when he compared “any effort to collect these strands” as comparable to creating “a course on ‘The Law of the Horse’”? Certainly he was correct in assessing that, as of yet, no unifying and coherent juridical philosophy exists to govern Internet law. At the same time, whereas a horse is merely one animal among many that are commonly used in the modern world, the Internet’s reach spans so far and is so enormous that judges are going to be compelled to develop a consistent way of legally contextualizing it whether they want to or not. As Srinivasan and Klobuchar have learned, we will need to determine the extent to which it belongs to the public rather than the private businesses that currently profit of it; as Harris demonstrated, it will be necessary to protect ordinary people from exploitation; and as Lynch’s stance on NSA surveillance makes clear, there are many in the government who believe it needs to be carefully monitored for national security reasons, even if the methods used are constitutionally questionable.

There are no easy answers to these questions, but it is vital that we ask them. Hopefully, as Obama narrows down his list of possible replacements for Scalia, he is asking them as well.