Is nothing sacred to these people?

DC could really use a win right now. After Batman v Superman failed to meet expectations, Suicide Squad is the company’s big summer hope. And, at least as far as box office take is concerned, it’s delivering big time. It’s currently set to be have the biggest opening weekend ever for an August release, bringing in somewhere between $140-145 million.

The only problem? Critics hate it. It garnered an abysmal 26% on Rotten Tomatoes. 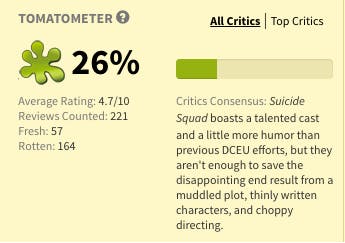 This was such an outrage to fans (who placed the film at respectable 73%) that one of them started a petition to shut down the site, which has been signed by nearly 20,000 people. Although, after taking some time to cool down, Abdullah Coldwater, the man who started the petition, changed the goal to a less ballsy “Don’t listen to film criticism.”

Still the point had been made. Coldwater, and about 20,000 other people, have had it with critics and their la-dee-da-fancy-pants opinions. It seems a revolution has been inspired. In fact there’s a movie opening this weekend that needs rescued from critics even more than Suicide Squad. A movie starring academy award winning actor Kevin Spacey. A movie that currently stand at a mere 7% on Rotten Tomatoes. That movie is Nine Lives.

Emboldened by the bravery of Mr. Coldwater, one fan has started a Twitter account to support the film and take on the tyranny of Rotten Tomatoes.

#RottenTomatoes is a litter box of corruption. Dig your claws into NINE LIVES this weekend! A visual fancy feast for the eyes! #FeelThePurr

The account is quickly building followers based on its unflinching look at the conspiracy that is going on in the world of film criticism.

Coincidence? I think not! pic.twitter.com/dNhDe0pSMP

#RottenTomatoes is rigged. Let's prove that their bark is worse than their bite. We will not be silenced. pic.twitter.com/dE6hN2aDDa

Not wanting to be unduly harsh, the account does point out that there are a few critics who do, in fact, have their shit together.

Some #critics get it like @TheAmyNicholson and probably own a cat and weren't paid by dog owners. pic.twitter.com/wT5Z3Ufs4I 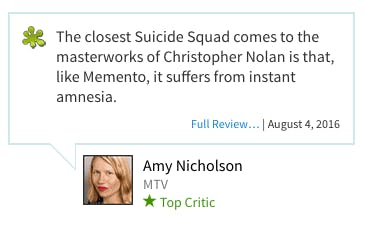 With both of these movements going on simultaneously, maybe shutting down Rotten Tomatoes isn’t such an unattainable goal after all. Finally, great films won’t be ruined by out of touch critics who think they know everything about cinema.  If the person running this Twitter account and Abdullah Coldwater can get together, who knows what they can accomplish!

Then again, they might have their own problems to work through first.