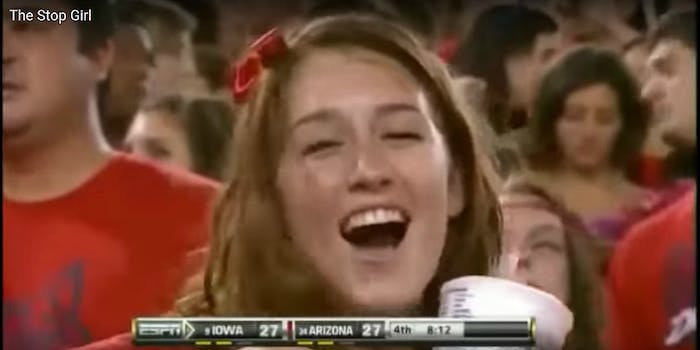 Sorry, bros—’Stop Girl’ got married to someone who isn’t you

After six years, her smile is still fantastic.

The woman who once told an ESPN cameraman focusing on her despair to “stop” has now officially said “I do” to her college sweetheart.

You might remember this adorable University of Arizona fan whose simple, one-word request became a meme all the way back in 2010.

Because of that moment, she was forever after known as the Stop Girl—and while Arizona went on to win that game, presumably leaving her in better spirits, that didn’t stop the spread of her good-natured reaction across the Internet more than a year later. Eventually, she told ESPN that her name was Sarah and that she found it amusing that a Stop Girl subreddit had been created to honor her few seconds of national fame.

“Everyone says things like, ‘Who is this girl? We can’t figure out. I wanna marry her. Her smile’s so nice,’” she said at the time. “Sometimes, it’s like, wow, that’s weird. People watch this over and over for two hours straight. That’s weird.”

Perhaps, but that didn’t stop Imgur user Unluky from announcing that the two of them got married a year ago. (That sound you hear is the simultaneous shattering of a million football fans’ hearts.)

So, here’s the update: Sarah is now a fifth-grade teacher. She’s only been recognized for her memeness a few times. She likes to hike. And apparently, people are still fairly interested in the whereabouts of a girl who flashed a beautiful smile for just a few seconds on national TV six years ago.