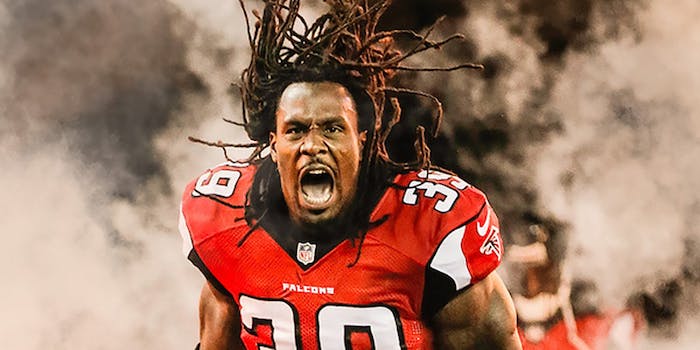 NFL running backs are more marginalized than ever before. Steven Jackson hopes to change that.

NFL running backs, especially the top-notch ones that are expensive to employ, are becoming more marginalized than ever before.

LeSean McCoy, the league’s leading rusher in 2013, was traded from Philadelphia last week for a linebacker who’s coming off an ACL tear and who didn’t play at all in 2014. The Cowboys declined to give DeMarco Murray, who was the NFL’s top rusher in 2014, a long-term deal and watched him walk into free agency. Adrian Peterson—who has been a long-dominant player in the league and who hasn’t yet turned 30—is likely at the end of his large paydays.

Part of the reason that RBs are disposable is that the NFL is such a pass-happy league these days that teams simply are throwing the ball more and relying on the ground game less. The other part of the equation is that teams can find solid RB talent in the later rounds of the draft, and because those younger players are so much cheaper, it simply doesn’t pay to… well, pay well.

Steven Jackson, though, wants to curtail that trend. The 11-year veteran who’s made three Pro Bowls and who recorded at least 1,000 yards every year from 2005-12 has built a foundation for RBs in need of large paydays. That’s why he’s started the SaveTheRunningBack.org website where fans can send a message to their favorite teams (or, I suppose, their least favorite)—more on that below—brush up on the all-time leading rushers in NFL history (Jackson is 16th), buy a T-shirt for $19.99, or watch this video in which Jackson pleads for your help like it’s 1981 and the manatees need saving.

In his plea, Jackson talks about how he wanted to be Walter Payton when he was a kid. Not just some of the time, though.

“Thing is, I wanted to be Walter Payton all of the time,” Jackson said. “Not some of the downs, not half of the downs, but all of the downs. That’s why I’m speaking out for RBs across the sport. The position we all fell in love with—the every-down back—is becoming an endangered species.”

Boy, it really sounds like he needs some help, despite that six-year, $44.8 million contract he signed in 2008. Which is why you can use the website’s form to write an email to a franchise. The letter reads,

Dear Team Representative, I am writing you on behalf of SaveTheRunningBack.org, an organization founded by Pro Bowl running back Steven Jackson, to express my dissatisfaction with the way that running backs are being treated in professional football today.

Running backs aren’t all the same. They’re not interchangeable. I yearn for the days of yesteryear, when players like Walter Payton, Barry Sanders, and Emmitt Smith were allowed to run free. The NFL was built on the carries of men like them.

Please value the running back position in the way that it was meant to be valued. Because when we do, everybody wins.

I’m not entirely sure with this venture if Jackson is kidding around, kind of kidding around, or deadly serious (either way, his video and website are enjoyable to peruse). After all, Jackson will be 32 by the time next season starts, and he clearly isn’t the dangerous RB he used to be, as evidenced by the fact that the Falcons released him last month. If anybody is an endangered species in this league, it’s a player like Jackson.

“Make no mistake: I can still punish a defense,” Jackson wrote on his website after he was let go by Atlanta. “I still have a warrior’s heart. There are 1,000-yard seasons left in these legs. I know what I am still capable of, and I have every intention of proving it.”

Now, he has to hope that you, the fan, will help possibly get him one final opportunity. Either that, or he hopes that you’ll buy his shirt.