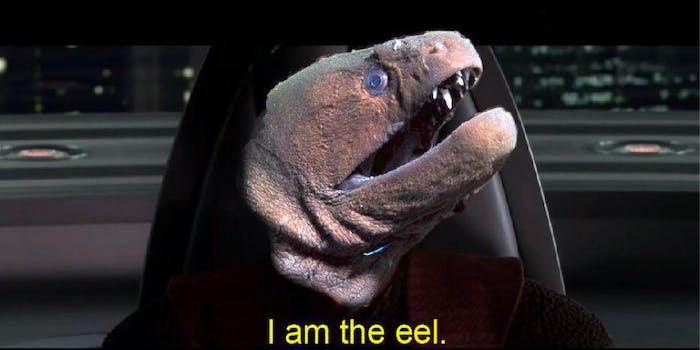 I've got a bad eeling about this.

The Reddit forum dedicated to memes about the Star Wars prequels is currently dedicated to something else: eels. After one popular post made a joke about the slippery sea-dwelling creatures, r/PrequelMemes erupted in eel jokes and puns, and there doesn’t seem to be anything anyone can do to stop it.

With apologies to Flo Rida: It’s going down for eel.

The eel epidemic is so big now that it’s hard to figure out where it started, but some posters are pointing to this image of Obi-Wan Kenobi from Monday:

Despite being a simple subtitle edit with a wacky caption, it strongly appealed to the posters on PrequelMemes. They took the eel theme and, uh, swam with it.

Two days later, the front page is dominated by eels:

Eels don’t have much to do with the actual plotline of the films, but users are embracing the tangent and editing eels into everything. It’s not hard to do, especially when a number of lines from the movies mention “feelings”—can’t spell “feelings” without “eel,” you know?

PrequelMemes and its little brother subreddit, r/SequelMemes, could go for years just mining raw material from their respective trilogies, but esoteric outside influences keep them fresh and bring new creative challenges.

Just a couple of weeks before the eel incident, PrequelMemes was involved in a Reddit-wide “Meme World War” that saw it teaming up with Trebuchet Memes and Garlic Memes to create new content and “invade” other subreddits.

Just because you could go on making memes about Chancellor Palpatine calling himself “The Senate” forever doesn’t mean you should, and it’s good to inject new material from time to time. Even if that material is… eels.