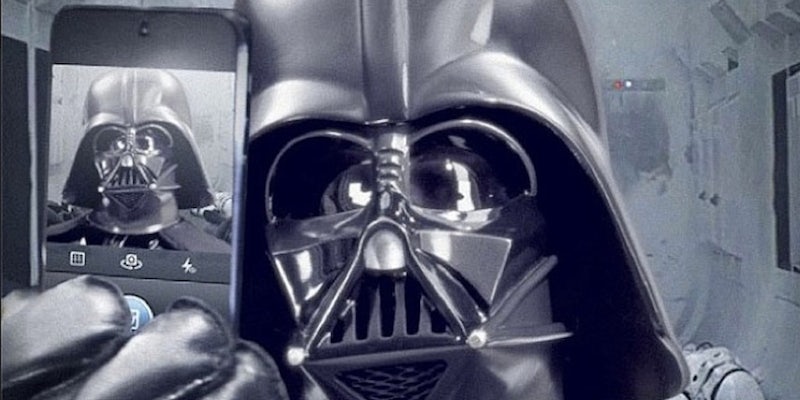 The force is strong with the new ‘Star Wars’ Instagram feed

The corporatization of Instagram finds a perfect mascot in Darth Vader.

The first photo posted on the account was of Darth Vader taking a selfie, accompanied by the caption “Another day at the office. #StarWars #DarthVader #selfies #gpom.” (Notice anything wrong with the image? His phone is backward!) In 19 hours, the official account gained more than 83,000 followers, and that number is growing fast.

Follow us at https://t.co/LxWVnCn9vC. It is useless to resist. pic.twitter.com/AiuJ6jwSKi

While filming Episode VII hasn’t started yet, Star Wars fans will want to keep an eye out for regular updates on this account as filming draws closer. Earlier this month a photo of director J.J. Abrams, producer Kathleen Kennedy, and droid R2-D2 shared on Twitter revealed that the astromech would be appearing in the new movie. It’s unlikely that this first photo is a sign that Vader will be returning to the franchise, but future photos might offer hints as to what we can expect in the new film.

Fans still have to wait two years before the new movie’s release, but it looks like Disney will be trying its best to get fans excited well before then. As we get closer it will be interesting to see how Star Wars takes advantage of its new home on Instagram. Maybe a Yoda selfie will be next?