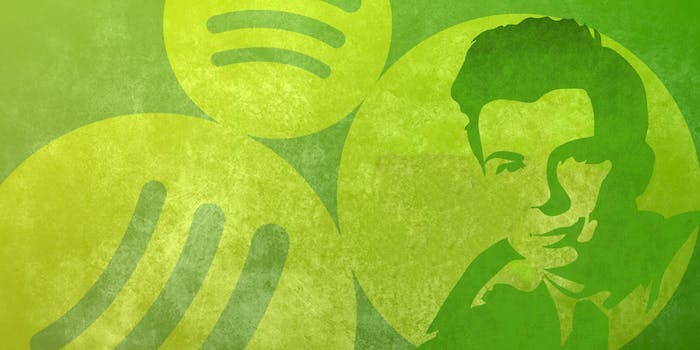 Spotify will gladly Rickroll you because nothing is sacred

Never gonna give you up.

There’s no feeling more fulfilling on the Internet than successfully Rickrolling someone. But now the bait-and-switch prank that sends people to the music video for Rick Astley‘s classic “Never Gonna Give You Up” is being perpetrated by an unexpected troll: Spotify.

Markus Price was listening to a bunch of video game soundtracks on the music-streaming service when some recommended tracks began playing. The first song to be served up was, of course, “Never Gonna Give You Up.”

It’s unclear whether or not the Rickroll was an intentional, but Spotify had quite the clever response to Price after he tweeted about the experience.

@actualtrashbag Hey, Markus. It was never our intention to http://t.co/FChH42ApiT you! ;) /T

Price didn’t even check the playlist link that they tweeted at him. But once he finally clicked through, he was in for a little surprise.

Those song titles look pretty familiar, eh? What’s particularly funny is that, although the song titles match up to Astley’s iconic lyrics, the songs themselves are from so many different genres and artists. There’s everything from Colbie Caillat to Ricky Martin.

“When I actually looked at the playlist my reaction was a nice mix of  ‘this can’t be real’ and ‘I need to tell someone about this,'” Price told the Daily Dot in an email.

So the 20-year-old artist posted his interaction with Spotify to Tumblr, where it’s gotten over 350,000 notes.

While Price initially getting Rickrolled wasn’t necessarily a technical glitch, the Spotify Customer Service team sometimes puts together playlists when they respond to user issues or links to certain songs as a sign-off.

The following tweet links to “Have A Nice Day.”

@ZincsAlloy No problem! Let us know if it happens again so we can report this to the relevant folks. http://t.co/mJs5KObHO4 :) /BE

Tumblr users have even read Spotify’s Rickrolling as the dawn of a new age of Rickrolling: the Rollissance.

“I love Rickrolling! I know I said on the post that I was mad but honestly it made me laugh, it was more of a ‘I can’t believe I fell for this’ type of mad,” Price said. “I’m not a huge fan of pranks but Rickrolling is something I can get behind—if we count it as pranking.”

And that’s the thing about being being on the Internet. Sometimes a link will give you a computer virus. Other times it’ll just be a classic Rickroll.