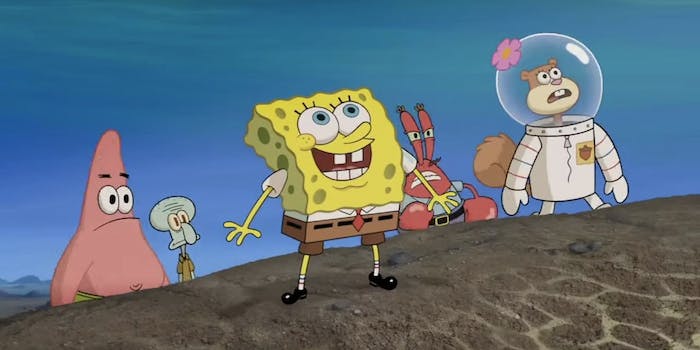 ‘SpongeBob SquarePants’ gets the academic treatment on Tumblr

The long-running animated Nickelodeon show about a gregarious yellow sponge named SpongeBob and his undersea antics has worked its way into the very foundation of modern pop culture. SpongeBob is pretty much a household name, and his series has seen two movie adaptations. More recently, the absorbent patty-flipper and his besties have become part of a trend on Tumblr: deep, textual analysis. A discourse meme, if you will.

Some of the earliest examples call out the capitalist society that SpongeBob‘s characters live in, and the work conditions that SpongeBob faces at the Krusty Krab.

[Placeholder for http://paperandinklings.tumblr.com/post/119723952469/brownpeopleproblems-spongebob-was-capitalist embed]
(Sorry, this embed was not found.)

While scholarly work on SpongeBob SquarePants already exists—a quick search on Google Scholar turns up over 2,000 results—the absurdity of these posts have made for a niche form of entertainment.

Also, it’s fitting that this meme has popped up on Tumblr. The social network’s community members point out various problems with pop culture, such as Iggy Azalea‘s appropriation of blackness, or the lack of diversity in Marvel movies. This SJW (social justice warrior) surveillance is common on the platform. But the juxtaposition between the academic mindset and lighthearted cartoon is what makes the meme so hilarious. It’s almost like these posters are poking fun at the self-serious critical analysis that often dominates users’ dashboards.

There’s even a level of self-awareness to the posts:

And this isn’t the first time SpongeBob has been memeified. “No, this is Patrick” is one of the most well-loved memes on the Web, used everywhere from 4chan to Facebook.

So, have you got a hot take on something problematic in SpongeBob SquarePants? Brush up on the show and put on your thinking cap. You could very well be the Internet’s next SpongeBob academic.