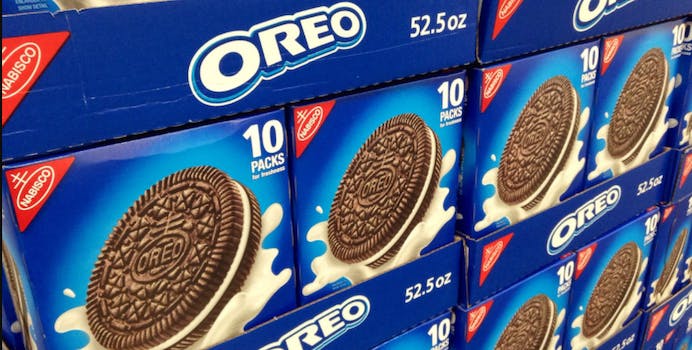 Why one man is sending 3,000 cookies to a soldier he’s never met

Beware of answering text from wrong numbers, or you too could end up shipping 3,000 Oreos to the other side of the world.

When you get a text from a wrong number, you have three options: ignore it, let the person on the other end know they’ve made a mistake, or play along and see what happens. Choosing the last option is how a guy from Cincinnati, named Mark Chalifoux, ended up plotting to send 3,000 cookies to a complete stranger.

Chalifoux is a comedian by trade so maybe choosing the text-less-sent was the obvious choice for him, or maybe he was just feeling sassy that day. But whatever the reason, when he received a group text that read “Always loves going to grammy’s!” along with a picture of an old lady and smiling child, he chose to reply “Looks like he’s having a blast!” and, well, as he explains in his Facebook post, one thing led to another.

A few months back, I was mistakenly included on some family’s group text. It was a pic of a little kid smiling with an old lady, and the text said “Always loves going to grammy’s!”

I responded with “Looks like he’s having a blast!” thinking they’d realize their mistake and remove me.

A day later, pic of the same kid, this time with a toy car, and a text that read “Of course I couldn’t resist buying it for him, fast and furious!” followed by a bunch of texts that were just like “aw, give him a smooch for me!”

I replied to that one with “I don’t know why I’m part of this, but I’m happy that kid got his car” and the person that started it replied “because you are family!”

About two weeks after that, it was a pic of four soldiers in front of a helicopter, with the text “Christian and his unit shipping out for six months.” Most of the responses were immediate, just “Wow, an officer and a gentleman, I pray for him every time we sing the anthem!” and stuff like that.

I replied “Which one is Christian?” thinking, clearly this will establish I had no business being included in this chain.

The person replied “third from the right” so I finally gave up and embraced it, and just said “A true patriot,”,which elicited a bunch of “Amens” and emojis from the rest of the group.

It’s been quiet for the last month, but today the person sent out a long text about how to send Christian a package while on deployment. Anyways, I guess my question is, what do you send in a care package to a complete stranger whose relatives don’t know how to text right?

The answer to that question turns out to be cookies. Lots and lots of cookies. Chalifoux started a GoFundMe campaign to send the soldier 3,000 Oreos, which is either gonna make this Christian guy very popular or very fat. The Daily Dot caught up with Chalifoux via email and here’s what he had to say about his crazy quest:

Mark Chalifoux: Once it was decided I’d be sending cookies, Oreos were the first brand that popped into my head. Like most of my thinking with this, it was that simple. In researching my answer for this question, Google concurs Oreos are America’s favorite cookie. I’m also hoping the good people at Oreo, Inc. will hear about this (I should probably tell them) and chip in a considerable quantity to put us past our goal.

I’m not married to Oreos though, so if any other cookie company wants to step up and really show [they] support our troops (I’m looking at you Chips Ahoy! people!), you can jump to the front of the line.

Or maybe they can all chip in cookies, and we can finally put aside the cookie wars that are devastating our country and we can celebrate a non-partisan cookie gift to the troop (maybe he’ll share with some of his friends to make it troops).

Do you plan to enclose a note with these cookies?

Yes. Otherwise, he would be quite confused. To the best of my knowledge, he didn’t ask for care packages, it was someone in his family. Also, he didn’t even ask for cookies.  I don’t even know if he likes cookies. So, I will explain his family keeps including me on group texts accidentally, and that I sent the cookies so I wouldn’t make whoever they thought they were texting look bad. Also, I think it would be kind of cool to know a bunch of strangers wanted to do something nice for you, so I think that’s more valuable than the cookies.

If you were on the receiving end, what would your reaction be?

I’m far too cowardly to join the military, so it’s purely hypothetical, but I’d probably be confused at first. But, once I figured out it was someone responding to a wrong number text in probably the best way you can, I’d be on board. It would be cool knowing a bunch of strangers wanted to do something for me and took some time to send some good thoughts, in the form of thousands of cookies.

You asked friends for suggestions, were any as crazy as 3,000 cookies?

At first, I asked for basic suggestions because I had no idea what to send in a care package, since I know nothing about this person. A few responded by wanting to chip in, so I asked the thread if it would be better to send a TON of one thing or to send something more modest and practical. The internet voted for an obscene amount of one thing. I have been surprised that 14 people already donated to the GoFundMe in the first two days. With so much negativity and sad stuff in the world and on Facebook, I think people liked the idea of making a small gesture to put some positivity into the world.

What are the logistics of shipping 84 packages of Oreos?

Oh man, I really wish I knew the answer to this. Even a little bit of the answer. I hope it’s not hard. I guess I’m going to find out once we hit the goal. They definitely won’t fit in one box, so it will be a lot of boxes.

A few people suggested staggering the shipments, so they come every month or so. That’s possible, but it sounds like more work to routinely ship those out.

Eventually, these people are going to invite you to a wedding or something. Do you think you’ll go?

Of course not. I know nothing about this guy. What if he marries someone I hate? I think it would be best for me not to go, just so the reception isn’t filled with that tension.

Also, I think the invite would put too much pressure on me to deliver a cookie-related gift. I suppose I would reconsider my answer if I’m allowed to bring guests (everyone who donates to the GoFundMe).

What are the odds that this is an elaborate hoax to get cookies?

Given that the decisions to A) send a package and B) send cookies were such split-second decisions, made with only a modicum of thought, I think it’s pretty low. That being said, it’s entirely possible that I’m being catfished. Although, no one has explicitly asked for anything in the texts, so if I am, I feel like they aren’t very good at it. I’m doing a lot of the heavy lifting in this catfishing, so they’re gonna have to work harder on the next rube.

If you want to help send Christian some cookies, you can check out the GoFundMe page here.