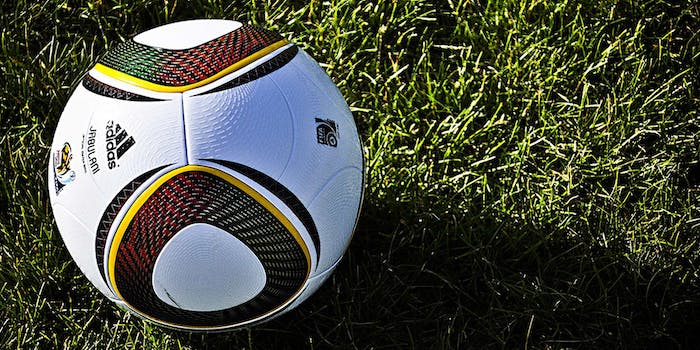 The World Cup is here, and the Viral Industrial Complex is working in overdrive. After USA’s win over Ghana and devastating tie against Portugal, soccer—nay, futbol—image macros, memes, and rants flooded Facebook timelines and Twitter feeds across the nation.

The deluge of soccer-related content raises a question that’s always asked around World Cup time: Does this unparalleled level of interest mean the United States has embraced soccer?

There are promising statistics in the affirmative. The American contingent at Brazil was larger than any other nation’s. The match between the U.S. and Ghana garnered a record-breaking 15.9 million viewers. More people are watching the World Cup than are watching baseball, the so-called great American past-time.

Counter-intuitively, the evidence proving soccer is not the Next Big Thing™ seems like it’d be the evidence proving soccer’s dominance: The 2014 World Cup is set to break every social media record on the book. That’s just more proof soccer is dominant, you say? That claim is the initial gut reaction upon seeing the data. But when attacked with a scalpel rather than a sledge hammer, the argument falls apart.

First of all, soccer is getting tons of media play because sects of affluent white people—the country’s most targeted consumers of Internet content, and arguably the country’s most prolific creators of Internet content as well—are watching it to appear educated and culturally literate. Numbers don’t indicate the emergence of a grassroots soccer movement, because there is none.

According to the Minnesota Youth Soccer Association, much of the interest children gain in soccer dies off as they realize the other sports—baseball, football, etc.—offer much greater opportunities. Outside of a few ascot-wearing Williamsburg douche bags, there’s no societal infrastructure to support soccer like there is with football.

The soccer triumphalism we’re seeing now is merely the result of the boom-bust period American soccer goes through with every World Cup. Just look at the Google Trends in the U.S. for “soccer.” Interest predictably surges every four years because of the World Cup, and peaks during the height of the games–only to plummet to the same, static baseline without fail.

Soccer is not more popular than ever in the United States. It’s not an untapped sport. Soccer is as dead as it ever was. The records it is breaking have nothing to do with the intrinsic value and popularity of soccer. Instead, they relate to the value of social media and live events in the current cultural climate. The content consumer’s abject devotion to live events has been apparent ever since the world produced over 9,400 tweets per second when Tim Tebow won a playoff game.

This isn’t necessarily news to denizens of the Internet, but to PBR-drinkers and others who insist soccer is soaring, it’s proof enough that soccer isn’t traveling to new heights.

People on the Internet crave being—please forgive me for this—“part of the conversation.” Social media allows them to take part in grand events in ways not possible before. Everyone can see Ellen DeGeneres’ Oscar selfie right as she uploads it to Twitter. Clicking “retweet” is all it takes to be part of the magic. It was the most retweeted tweet of all time not because of any particularly moving aspect, but because users wanted to belong. Live sporting events and award shows have all been reporting outstanding social media numbers because of this fact.

Soccer isn’t going to replace football or another major American sport any time soon. Social media has become a force multiplier for existing fans, allowing their voices to carry further than ever before and seem more numerous than ever before. And while social media also exposes new Americans to soccer who might not have watched before, these same Americans will latch themselves onto the next viral train that leaves the station, forgetting all about soccer until 2018 when it’s fun to tweet and share image macros about it again.