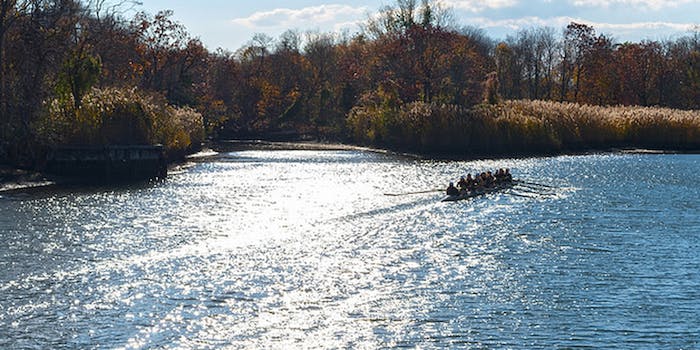 This may be the greatest boat race disaster of our time

Riverhead, N.Y.'s Snowflake Regatta will never be the same.

First off, let’s take a moment to be thankful that no one drowned. Secondly, let’s pray that whoever uploaded this unlisted video doesn’t delete it—ever. Finally, let’s shamelessly revel in the slow-motion disaster that was Riverhead, N.Y.’s 2014 Snowflake Regatta.

Why do these boats keep crashing into each other? Why can the occupants not manage to row themselves clear of oncoming teams that don’t appear to care where their prows are aimed? And how, exactly, do the screaming, Long Island-accented parents on the sidelines think they’re helping? That is not for us to say. Just accept the mystery.

God willing, whoever filmed this will indeed submit it to MTV’s Ridiculousness, per one dad’s suggestion—never hurts to remind ourselves that we belong on terra firma.