Your attacks on YA lit only make us more powerful

Your uninformed, condescending opinions on YA literature only serve to make the women who write it that much stronger.

The most frustrating thing about lazy attacks on children’s and young adult fiction, like Slate’s diatribe against adults reading teen lit, is that they encourage more lazy attacks.

You have already read this Slate article. You read the Slate article when it was in the New York Times, the Los Angeles Times, Harper’s, the New York Times again, the Baltimore Sun, in Salon a few days ago, and in Slate previously (bonus points that the writers congratulate themselves for not reading or writing “slutty werewolves”). You read the article when it was concerned that YA literature was too dark, too sexy, too depraved, too girl-centric, not enough like Jane Austen, not enough like Louisa May Alcott, and, in an early example from 1986, “a ghetto” composed predominantly of women authors.

Luckily I don’t have to list the repeated patterns and tropes in these articles, because there’s already a bingo card for them, created by current Hugo nominee Foz Meadows. There’s even a John Green–specific bingo card, courtesy of YA blogger Kelly Jensen. 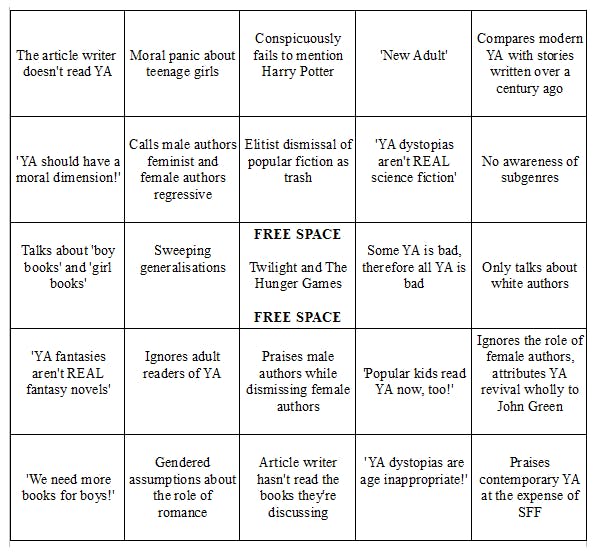 Study this bingo card, journalists. Recall it when you go to write articles about genre fiction, particularly if your article contains any of the following words: “embarrassing,” “women’s fiction,” “teenage girls,” or “vampires.”

More importantly, read How to Suppress Women’s Fiction and then ask yourselves if perhaps the tropes you’re ridiculing could possibly have arisen from the perpetual struggle of adult women writers to use their voices in a society that does everything it can to shut them up.

Slate writer Ruth Graham claims concern for the complacence of Today’s Youth, but she’s really policing female authors. “Pleasure, escapism, juicy plots, and satisfying endings” are all signs of weak literature to Graham, but adult genres that cross gender lines get a pass. For Graham to acknowledge that plenty of adult genres contain these same hallmarks would be to undermine her own argument that “stretching yourself beyond the YA mark” is “akin to the excitement of graduating out of the kiddie pool.”

That “kiddie pool” includes authors like S.E. Hinton, E.L. Konigsburg, and J.K. Rowling, who turned to young adult fiction using initials in place of a (female) name that could have hurt their career. Women writers are reviewed far less in mainstream literary review publications than male writers, are read less than male writers, and are more likely to be blamed for any perceived flaws in their genres. When Graham argues that “maudlin drama” demeans YA, she overlooks the ways in which female authors are barred from full ownership of “serious” literature. When Graham argues that YA “presents the teenage perspective in a fundamentally uncritical way,” she fails to acknowledge that even if this were accurate, YA writers have spent decades fighting for a space where they can write from uncritical perspectives.

Historically, women writing fiction have been minimalized, dismissed, hidden, and erased. These things exist alongside the media’s regular handwringing over the existence of female-driven genres that operate outside the boundaries of traditional literature. (See also: fanfiction.) When male writers participate in these spaces, they are accoladed and elevated above their female counterparts. But their works are unavoidably ensconced in that welcoming circle of femaleness, imbibing those weakling female tropes and gaining power from all those non-serious female feelings. The media is just going to have to deal.

Until that day, let us ignore the alarms about women writing things, whether it be children’s or YA lit, romance, fanfiction, webcomics, New Adult, or whatever new genre women are currently on the brink of creating.

While the Ruth Grahams lament the rise of this new destroyer of worlds, you and I can retire to our Steel Magnolia patio and drink fruity mixed drinks of which Hemingway and Kerouac would never approve. We can watch the world burn beneath the blazing pink flames of this new frilly literary establishment while discussing whether Hermione could take Alanna in a cage match. And when the civilizations of the earth have crumbled to a smoldering ash heap beneath the terrible inferno of our love for slutty werewolves and coffeeshop AUs, we can breathe a sigh of relief and express our inarticulate teenagery feelings with a reaction GIF.

And we can turn to the next chapter and keep reading.