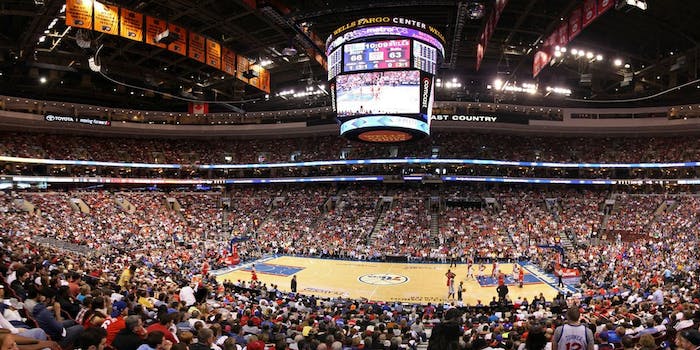 This play is everything wrong with the 2014 Philadelphia 76ers

Three-pointers rain as the Philadelphia 76ers aim for record slide.

Between Wilt Chamberlain and the duo of Dr. J and Moses Malone, the Philadelphia 76ers went through a long, dry spell. With this year’s dismal and winless team, all local sports fans can say is “welcome back losers.”

In the midst of a 14-game losing streak to start the 2014-15 season, the team is only one loss away from tying the all-time NBA record for futility—a 15-game string of defeats in the remarkable 1972-73 season. This year’s version of hapless on-court play is demonstrated by the Sixers’ lack of motivation in covering Portland’s Damien Lillard on a wide-open three-point play. Lillard had time to leave the stadium, buy a cheesesteak at Pat’s, and return to fire up his uncontested shot. Nerlens Noel finally makes his way over to offer some semblance of interference to save his team from total shame.

GIF: Sixers defense on this Damian Lillard 3 is terrible, and they were *ahead* at this point http://t.co/eq5QxP04fW

Sixers coach Brett Brown, who has publicly shown his frustration this season, decided to take the positive approach in his postgame confab with reporters. “We’re not that far away. I genuinely believe that,” Brown told the Philadelphia Inquirer after Monday’s game. “I think that this team is starting to see bits and hints of a team. Nobody is rolling over or pointing fingers. These guys are great.”

As a firsthand witness to the 9-73 Sixers of 1972-73, this edition of my hometown’s NBA franchise will have some big shoes to fill when it comes to local sports hatred. With such notable bumblers as Dennis Awtry, Mel Counts, and Bob Rule, it was a wonder the team from more than two decades past did not lose all 82 games. That season’s horror was all for a good cause as it landed the team the top pick in the 1973 NBA draft. That brought Doug Collins to Philadelphia and eventually led to an NBA title a decade later.

Should the losing continue (and there’s no reason to expect it won’t) and the lottery balls fall their way, the Sixers could land University of Kentucky center Karl-Anthony Towns who is expected to be the top pick in next year’s draft. With Towns and the successful rehab of 2014 pick Joel Embiid, next year could be the year.