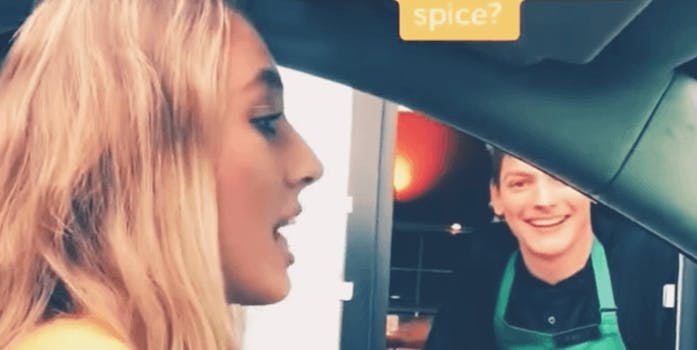 She ordered a pumpkin iced coffee and posted cringe.

Influencers are always pushing new frontiers in how annoying they can be in the name of content.

TikTok creator @inhertower has gone viral for one of the cringiest person-on-the-street stunts we’ve seen on the platform so far: Singing her drive-thru Starbucks order.

Since she posted her video, it has been reposted all over TikTok, put up on YouTube, and made the rounds on various other social media platforms. Love it or hate it, people are watching it.

Like so much of TikTok’s content, it’s hard to say exactly what made the video go viral. She certainly has a unique order, including guava white tea lemonade with light ice, an iced coffee with one pump of pumpkin spice, and an extra cup with “just ice,” but is that enough? Did she blow up because people were charmed by her pipes or annoyed by her twee stunt?

if someone fucking did this to me at st*rbucks I would have put my mouth on the steam wand and turned it on pic.twitter.com/whDxzxVyGi

It is also possible that the video has become so popular thanks to our empathy with the anonymous barista who had to endure to sung order. The involuntary co-star of the video reminds many social media users of their time in the service industry where they were forced to smile and go along with anything their customers threw at them. In the replies to the video on Twitter, users are talking out their own customer service revenge fantasies.

i woulda just closed the window and walked away

After all, @inhertower’s display name is “Cringe Queen,” so maybe she knows that her work won’t be universally well-received.

Regardless of why the TikTok went viral, one thing’s for sure: Where there is viral success, there are attempts to recapture it. @inhertower has posted other Starbucks videos, and we will surely get more in the coming weeks, whether we want them or not.