The death of Harambe may never infect the world of corporate America, but that doesn’t mean that the silverback gorilla isn’t a great boon for branding. Take pro golfer Smylie Kaufman, who just transcended his boring sport thanks to this RIP Harambe-branded wedge.

No one would’ve heard of this dude had he not whipped his golf club out for Harambe at the Masters. He made a fairly basic object exciting again.

So too did Nicholas Verity and two friends, informally known as the team. 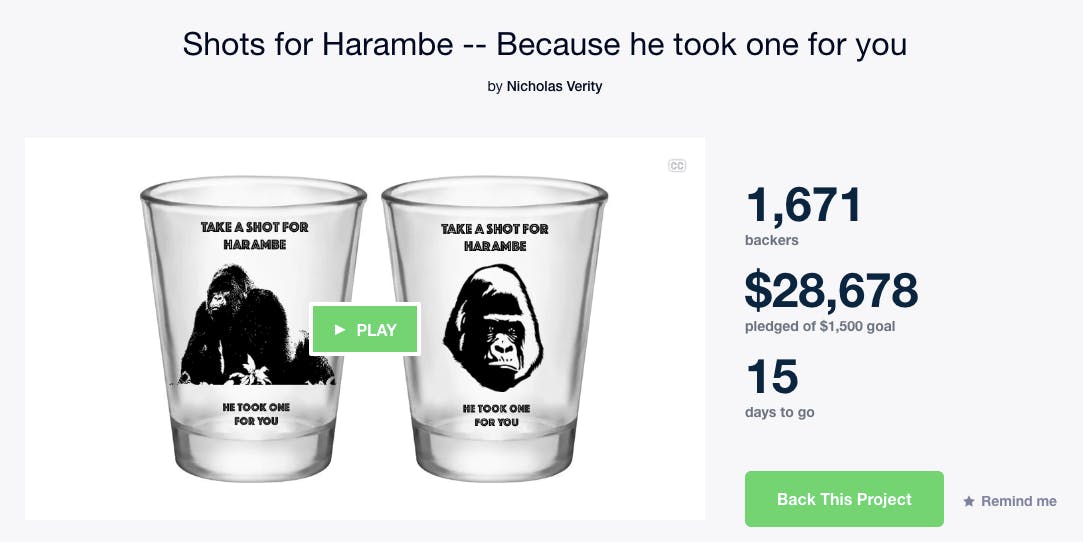 Their “shots for Harambe” Kickstarter has taken off faster than the speeding bullet that helped inspire the shot glasses. As of this writing, the Kickstarter has raised over $22,000—far exceeding its modest goal of just $1,500.

“The idea mostly came to us as a joke when we were having some drinks at a friend’s house,” the team tells the Daily Dot. “The conversation was something along the lines of: ‘Richie let’s take a shot!’ ‘I’ll take a shot if it’s for Harambe.’ ‘True, he took one for us!'”

Feedback from friends indicated an interest, so the team set about seeing how feasible it would be to craft shot glasses emblazoned with the joke and visage of Harambe on them. Not only was it doable, but it’s exactly what the people were thirsty for in this time of collective mourning.

The team owes some inspiration to the Dicks out for Harambe movement. “[It] has humanized Harambe and unintentionally raised awareness for issues around animals,” the team explains. “Our product combines the satirical and humanitarian side of Harambe’s story and can help fuel and celebrate his movement.”

Rewards for donors range from singular shot glasses to an entire, ambitious party pack of 20 shot glasses. The ultimate reward is a $200 “Meet Harambe” package, which includes the 20 shot glasses as well as a chance to meet the team behind it, so long as you’re in the Los Angeles area. Sadly, it doesn’t look like they’re looking to resurrect the ape, unless you count evoking his memory some type of abstract reanimation.