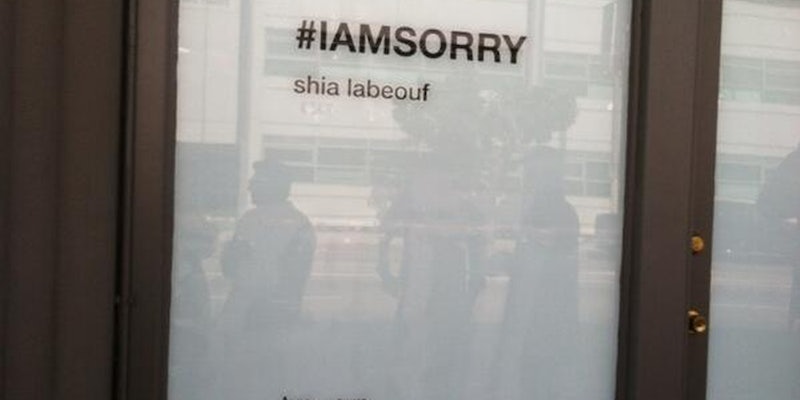 Why does every viral stunt have to turn into a pretentious art project?

For years, two guys operated a beloved Twitter “spam” account that finally ended with a phone number; when you dialed it, they read you their tweets from an art gallery in NYC. An L.A. pop-up shop called Dumb Starbucks attracted hour-long lines and massive speculation on Twitter and Instagram—and the crappy coffee turned out to be a marketing stunt for a Comedy Central show. Now Shia LaBeouf is getting in on the action: He’s found a way to turn his bizarre online behavior into a campaign for an exhibit called #IAMSORRY (yes, hashtag included).

L.A., are you sick of viral art projects yet?

Here’s what happens when you visit:

Waiting outside Shia LaBeouf’s #IAMSORRY installation (across from our office). pic.twitter.com/9YW9YClbip

You’ll take some photos outside:

This is @buzzfeed + art. pic.twitter.com/Dclyayai9d

And then some, uh, weird stuff happens.

IT WAS FUCKING CREEPY

#IAMSORRY You are told to choose an implement from a table, there’s a Daniel clowes book, a whip, some hershey kisses, a wrench, etc.

#IAMSORRY And then you go into a room and he’s RIGHT THERE and it’s HORRIBLE. AND HE SAYS NOTHING.

ONE OF THE IMPLEMENTS IS A BOWL OF TWEETS. THAT YOU READ TO HIM.

#IAMSORRY What the fuck did I just experience.

#IAMSORRY I told him that having the whip as one of the choices was really fucking crazy.

There’s more. Andrew Romano of the Daily Beast visited LaBeouf and asked him a series of questions. After one of them—“Are you really Shia LaBeouf”—the actor took the bag off his head. He looked like he had been crying. Romano finagled LaBeouf’s consent through a series of silent responses, then took his photo, shook his hand, and exited.

LaBeouf was wearing a bow tie and tuxedo; in front of him was a bowl of angry tweets about his plagiarism. Here’s what he looked like. 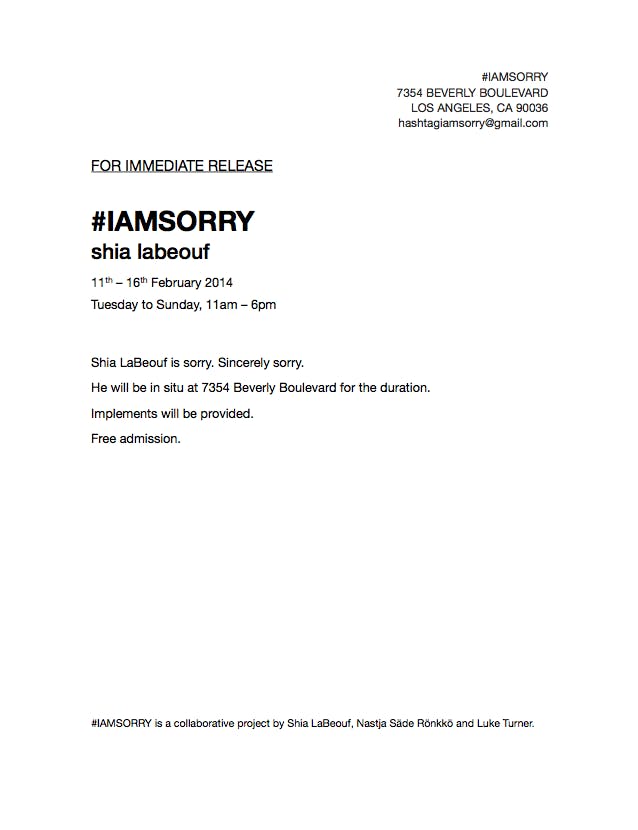 It’s not like no one could see this coming. This week, LaBeouf was spotted at the Berlin Film Festival wearing a bag on his head that read “I Am Not Famous Anymore”—the same phrase he’d been tweeting over and over again. A month earlier, he’d announced he wanted to retire from “all public life.” And this, of course, came after a string of well-publicized plagiarism accusations in which the actor apologized by plagiarizing something else.

So what the hell is this exhibit? Is it some kind of Marina Abramović‎–inspired commentary on what it means to be tried and convicted by social media? (And what does he think we’re actually going to do with the hammer?) Is he screwing with us, mocking his audience for taking his stunts seriously and expecting some semblance of contrition? Or is this a James Franco move, an attempt to be taken seriously as an artist, as something more than the Transformers guy?

Most importantly, why does viral stunt in 2014 have to lead up to some pretentious art project? Maybe we’ve left the era when a troll could troll for trolling’s sake. It’s almost enough to make you miss Elan Gale.