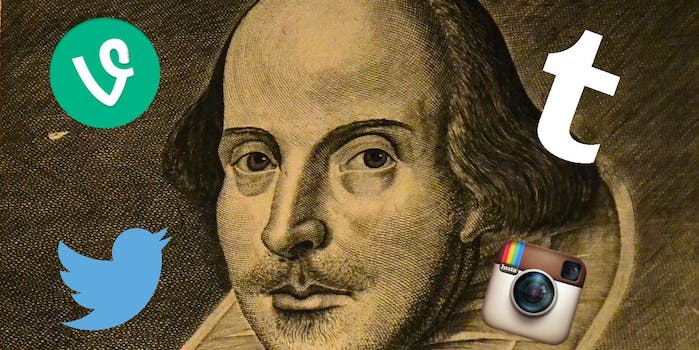 Romeo and Juliet are bae: Revising Shakespeare’s plays for the Internet age

Gone is the age of falling for the cutie from the feuding family across the way. Just swipe left and move on.

The iconic English poet/playwright/word-inventor William Shakespeare died in 1616—a whopping 391 years before the first iPhone came out. And although the Bard’s work is some of the most influential content ever, isn’t it a little hard to connect with nowadays, given its pre-Internet concerns?

With this in mind, we’ve updated some of Shakespeare’s biggest hits for the Internet age—and just in time for his birthday this week. You’re welcome, Billy boy. [Enter winking emoji and celebration emoji]. Read on, lit buffs, and damned be him who first cries “No more Snapchat, enough!”

Prince Hamlet is an aspiring DJ hoping to bring sick beats to the world of EDM. But his whole world is turned upside-down when his investment banker father dies in a horrendous paragliding accident, and his dad’s brother marries his mother. Prince Hamlet’s friends find old YouTube makeup tutorials recorded by Hamlet Sr., one of which reveals that he knows his brother is trying to kill him.

They let Prince Hamlet know about the vlogs, and he’s obvi very upset, but torn over whether to off his uncle. He frantically tweets about it, crowdsourcing opinions with the trending topic #HelpHamletDecide. Outrage ensues, a bunch of people get hurt, and in the end, Prince Hamlet ditches all the drama to play a set at ULTRA music festival.

Most famous line: “To hashtag, or not to hashtag, that is the question.”

Thesis idea: Dubstep and Doubt — When DJs Take To Twitter For Advice

Hermia matches with Lysander on Tinder, and they promptly fall in love, but Demetrius has been tryna with Hermia since their parents set them up. Meanwhile, Helena is super into Demetrius after one Hinge date. Then Lysander sees some of Helena’s old nudes on her Tumblr art blog and is enticed.

Trying to navigate all this drama, they decide to meet for boozy brunch. But between the Instgramming of French toast and seraphs full of mimosas, they get too turnt up and black out.

Most famous line: “Lord, what fools these basics be!”

Three Twitter feminists send Macbeth ominous DMs on Reddit, prophesying that he will one day rule Uber. Thirsty for the throne of the booming startup, he deposes the current CEO.

Soon, however, guilt takes over, and Macbeth assimilates into the horrible dudebro culture of the tech industry. To cover the original ousting, he employs his Uber drivers to do his dirty work. Eventually Macbeth is overcome with arrogance, madness, and—of course—death.

Most famous line: “Let not light see my black and deep erotica that I anonymously posted on Reddit.”

Thesis idea: Reddit Right of Passage — When Redditors Upvote Their Lives, Downvote Others Into Oblivion

Romeo comes from a Medium household, while Juliet comes from a Tumblr family. The two clans have been feuding for ages, but the two star-crossed bloggers fall for one another after Romeo uses some Tumblr GIFs that Juliet made.

Over the course of three content-creating, love-making days, the two teens begin to fear that their young romance is doomed. Juliet comes up with a plan to deactivate her Tumblr temporarily, but her text doesn’t get to Romeo because his iMessage has been acting up. Unable to find Juliet’s blog, he believes her to be forever gone and deletes his entire online presence.

Thesis idea: “My Blog Is My Relationship” — Youth Culture, Blogging and Its Discontents

Freelance graphic designer Orsino really wants to get with this chick named Olivia whose profile he saw on OkCupid, but she doesn’t ever message him back. Viola, who has a double life as a SoulCycle instructor, catfishes as a dude and goes by the name of Cesario. She begins interning for Orsino, who has her (dressed as a dude) help him woo Olivia via OkCupid messaging.

Naturally, Olivia falls for Viola dressed as Cesario, because girl has mad game. All the while, Olivia is falling for Orsino—the classic love triangle has been formed.

Photo via Flickr/Ben Sutherland (CC BY 2.0)