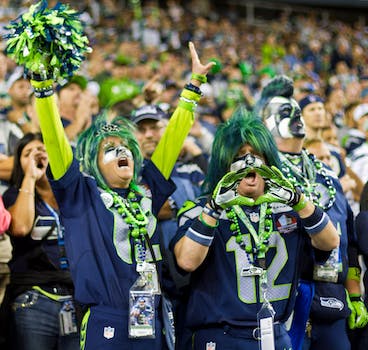 Grandma needs to stop having birthdays during the playoffs.

The Seattle Seahawks‘ Sunday victory over the Green Bay Packers for the NFC Championship title certainly wasn’t an easy win. In fact, at several points in the game, it didn’t look like the Seahawks would make it anywhere near Super Bowl XLIX. Needless to say, this caused unendurable grief for Seahawks fans all over the country, as they updated their Facebook statuses every 10 minutes with messages like “WTF Seattle?!?!?!” and screamed profanities at the TV.

Today, we discovered one lasting bit of collateral damage from the temporary heartburn of being a Seahawks fan. One of the team’s rabid supporters reacted so loudly to the tense game that he ruined a Happy Birthday message.

The Seahawks’ fan’s wife and their infant son were trying to record birthday greeting for Grandma on the computer, but the man just wouldn’t let up. As the mother sings a foreign-language version of Happy Birthday and does her best to get the toddler to join in, good old Dad can be heard plain as day from the other room, swearing his head off at the Seahawks.

Something tells us Dad was in a better, more party-friendly mood by the end of the game.

Photo via PhilipRobertson/Flickr (CC BY 2.0)