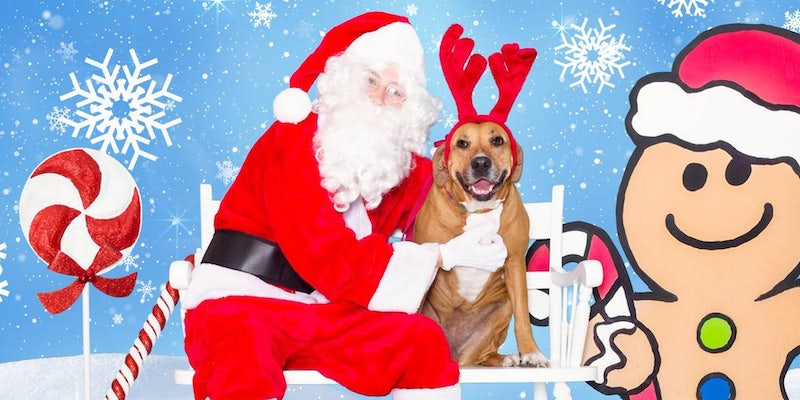 Most dog owners would do just about anything for their beloved pooch—even treat them like a human child and take them to get photos with Santa.

Take Kya, a 1-year-old Shiba Inu whose owners took her to go see the life-sized version of her favorite toy.

My dogs favorite toy is Santa, so we brought her to see him pic.twitter.com/vPl6YMyOIz

Or Shea, a 3-year-old Labrador mix whose dad secretly took her to get her glamor North Pole pics done.

My dad said he was taking my dog to get photos and I wasn't sure what that meant BUT THEN pic.twitter.com/pOkEetrr0g

Dogs could not be more hyped to meet Santa Paws in the flesh.

When you're waiting for your Apple store appointment for 2 hours & Santa convinces you to let your dog sit with him… I regret nothing pic.twitter.com/WSvUQiBHF3

And if they can’t join Santa, what’s the harm in putting on the old man’s getup and beating him at his own game?

MY DOG IS WEARING A LIL SANTA HAT IM pic.twitter.com/09z86zPKWY

i dressed my dog up as santa and she is so happy pic.twitter.com/cPaKzr1ZhM

With December just arriving, dogs had the right idea to take photos for Christmas cards weeks upon weeks in advance.