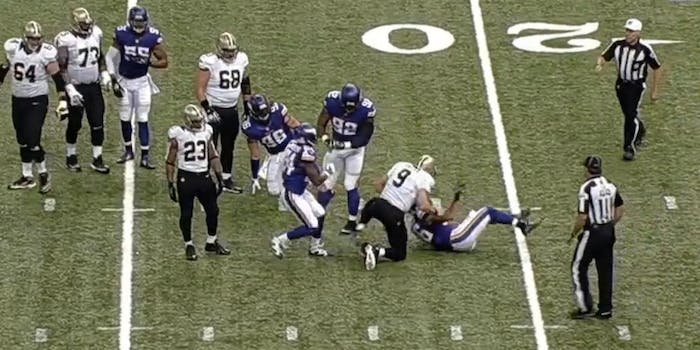 The Saints quarterback got the last laugh.

The Minnesota Vikings learned the hard way that slamming Drew Brees to the ground only serves to unleash his competitive fury.

On the final play of the third quarter in Sunday’s game at the Superdome, the Saints appeared to be running out of gas when Vikings defensive backs Captain Munnerlyn and Robert Blanton came flying to sack Brees for a big loss and further deflate what has been a disappointing season for the New Orleans squad. The sack quickly morphed into a WWE-like suplex à la Kurt Angle with the two Vikings envisioning Brees as a turkey whose wishbone needed to be split into two.

Brees came up swinging, and his anger was not assuaged by the roughing-the-passer call that followed the showy, pointless cheap shot. The former Purdue Boilermaker and San Diego Charger is relatively small by NFL standards (listed very generously at six-foot tall), but he carries the passion and fire of a player twice his size. Proving that revenge is best served via points on the scoreboard, Brees marched his team down the field for a score that capped the 20-9 victory over the visiting Vikings.

Saints fans told the world via social media that if you mess with their Texas-born QB, you will pay the price.

Before every @Saints game, we should do something to get @drewbrees angry. He was in the zone after that body slam!! Haha

For the record, it was a great day for quarterback graduates of Austin’s Westlake High School. Nick Foles, nine years Brees’ junior, led the Philadelphia Eagles to a 37-34 win over the Washington pro football team.