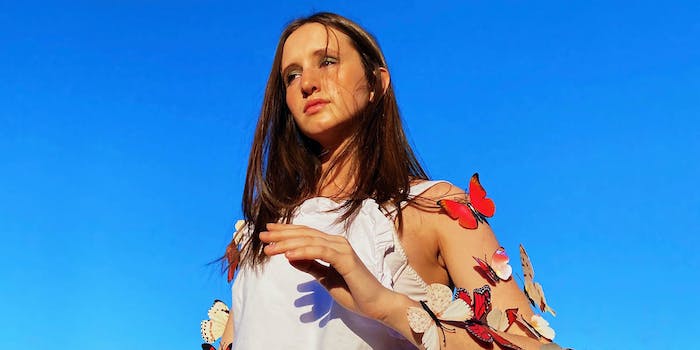 ‘I’m learning how to manage my time better so that I have time to actually live my life.’

This week, we spoke with Sadie Jean, a 19-year-old singer-songwriter with over 517,500 followers on TikTok who is currently adjusting to an explosion in popularity online. In particular, soundbites from her first single “WYD Now?” went massively viral on the app in December, and the song now has a stunning 68 million listens on Spotify.

Jean’s large following on social media, and on TikTok in particular, has been driven by videos which condense her music into catchy, powerful soundbites and provide participatory elements—including duet prompts for the #OpenVerseChallenge, livestream promos, and dance challenges.

In an interview with Passionfruit, Jean described her reaction to blowing up online, how her internet virality translated into music videos and touring, how she manages her connections with followers, tips for marketing music on social media, and more.

Did you ever expect “WYD Now” to blow up like it did?

No, I didn’t expect it at all.  I was just having fun posting on the app and people really liked the song which was crazy.

What is your favorite TikTok duet of “WYD Now” you’ve seen so far?

There were so many amazing duets it’s honestly overwhelming.  I don’t even wanna know how many hours I’ve spent scrolling through every single one I could possibly watch. I have a whole album of my favorites saved on my TikTok. Zai1ks and Zakhars really stuck out to me though, both were stuck in my head 24/7. I’m so excited to finally have the remix featuring both of them out on all platforms.

How did you land on the creative direction for the “WYD Now” music video?

It was a very very collaborative process. Going into it, I knew I wanted the whole video to take place in my bedroom. My director Jackie and I wanted it to come across as personal and detailed as the song felt for me. I divulged many specifics about my relationship that she somehow managed to include in the video. I’m so proud of how it turned out.

How have your live performances gone since going viral?

Finally being able to perform is the coolest thing ever. Hearing “WYD Now?” sung back to me for the first time was absolutely unreal and I have so many other unreleased songs I have that are even more fun to perform.  Most of my interactions with my supporters are online, I was not prepared for how amazing it feels to finally be singing with everyone in REAL life.

For a while I was just stuck checking my notifications every 5 seconds and working all the time, and then I didn’t have anything to write about. I’m learning how to manage my time better so that I have time to actually live my life outside of all the crazy career stuff.

How do you manage your relationship with your followers?

I am always trying to respond to my DMs and comments. One of my favorite things to do is go live on TikTok or Instagram so I can interact with my followers in real time. I also set up a phone number where I can text with my supporters. My favorite thing to come from all of this is connecting with new people who relate to my song. I’ve learned so much.

At my New York show, I met a girl named Kennedy and her mom, Courtney.  Kennedy had just turned 12 and it was her first concert ever. The two of them explained that they flew all the way from Austin, Texas just to see me perform. That seriously was the coolest thing ever.  I still can’t believe I was her first concert ever, and that they were willing to really show up for me like that.

How do you think TikTok has changed the music industry?

TikTok has completely changed the music industry.  It has become much more democratic in the way that the people decide what’s good or not, rather than the people in the industry. I think it’s a super exciting time to be an artist.

What advice do you have for someone who wants to use social media to market their music?

I think it’s most important to have fun with it.  Viewers can sense whether you’re having fun or just posting to check it off your to do list.  Only do what brings you joy!

What plans do you have for the future?

I’m SO excited to finally be releasing more music. The next few singles all continue the story of “WYD Now?” which I think is super special. I’m also excited to keep performing and connect with more of my supporters. I’m playing my first festivals in a few weeks which is absolutely insane.  All in all I just want to continue to grow musically and personally.

Thank you, Sadie, for chatting with us!

Do you have advice for how to build community online? Email [email protected] for a chance to get featured in an upcoming newsletter.