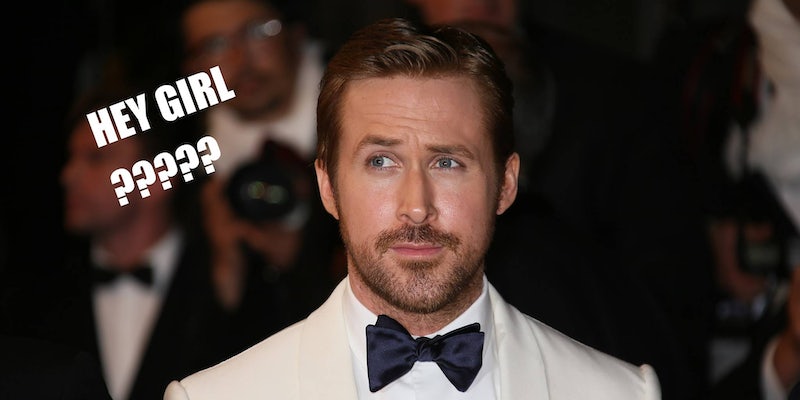 It’s no secret 2016 has been a year filled with disappointments. Famous people have died, the election cycle was a nightmare, and Ryan Gosling doesn’t gotdamn get his own meme.

He’s pro-“Ryan Gosling Won’t Eat His Cereal” but incredibly anti-“Hey Girl” and he’s not afraid to let the world know. Back in August, he threw a fit about the meme and the fact that, perhaps up until that moment, “Hey girl” was simply something he’d never said before:

“I never said it! I never said it. Now, I understand if you’re in a movie and you say, ‘You complete me,’ or ‘I’m just a girl standing in front of a guy,’ and that follows you around, and you’ve got to own that. But I never said it.”

He spoke out about “Feminist Ryan Gosling” as well, calling himself “not a good person” who doesn’t “even compost, man!”

Gosling’s anti-meme stance is back in the news thanks to a fresh interview with Variety in which he likened “Hey Girl” to Fabio breaking his nose after a renegade pigeon slammed into his face while he was riding a rollercoaster. Gosling says:

“Do you remember when Fabio got hit in the face with a pigeon on the roller coaster and it broke his nose. Sometimes I feel like I’m the pigeon and the internet is Fabio’s face. Actually, I don’t know if I’m the pigeon or I’m Fabio’s face. Depends on the day, I guess.”