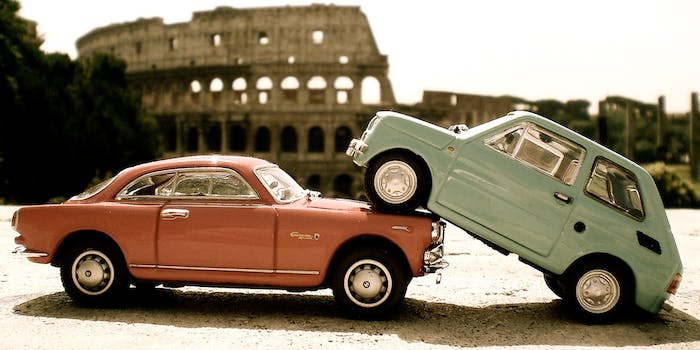 Cops in Rome count on Twitter for reports of illegal parking

Does your Smartcar really need all that space?

Automotive congestion in Rome is the stuff of legend, with narrow streets the norm and triple-parking not uncommon. Now police are tapping social media in order to punish traffic violations: any tattletale who sees a Fiat or Vespa illegally situated can tweet details to @PLRomaCapitale, then sit back and wait for confirmation that the vehicle has been ticketed.

In fact, taking photos of cars parked in pedestrian crosswalks, or on sidewalks, and sometimes just in the middle of the road, has become a noble sport for the exasperated citizenry. It’s certainly a good way to vent about entitlement, or “defiance and arrogance,” as this user had it:

In a matter of hours, fines are meted out. “3 cars were sanctioned,” the police noted here:

The @PLRomaCapitale account also keeps tabs on various closures and repairs—anything that a driver might need to know about. Here, for example, is their map of flooding and other problems brought about by a recent major storm. “Ready for the maze?” the caption reads.

Business Insider quoted Raffaele Clemente, new head of Rome’s urban police force, on the importance of cultivating a city-wide network of informants. “Sharing, such as on social networks, is needed to fight certain patterns of illegality and rule-breaking, and also of crime,” he said. In other words, cultural attitudes are best modified with mass involvement.

Does the service herald a brave new future for Rome’s motorists, one with less road rage and more time saved? Well, parking is just part of the equation. There’s only so much you can do about stuff like this: