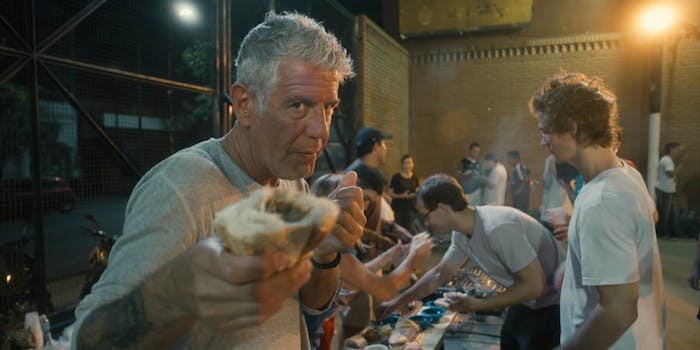 Death is a constant shadow in Roadrunner: A Film About Anthony Bourdain, Morgan Neville’s (Won’t You Be My Neighbor?, 20 Feet From Stardom) raw and complicated documentary about Bourdain’s life in the spotlight. If you’ve watched some of Bourdain’s travel shows like No Reservations or Parts Unknown, you might not be a stranger to Bourdain’s gallows humor, particularly his musings around death or suicide.

Roadrunner: A Film About Anthony Bourdain

Release Date: July 16, 2021
Director: Morgan Neville
Release: Theatrical
Through a blend of raw and intimate interviews with those who knew him and a treasure trove of archival footage, Morgan Neville paints a compelling and complicated portrait of Anthony Bourdain’s life once he entered the spotlight. Although it doesn’t give viewers the answer to one of the biggest questions still surrounding Bourdain’s death, it might start to offer them a bit of closure.

But Roadrunner’s first scene is striking all the same. In Provincetown, Massachusetts—where Bourdain first got his start in a kitchen—he casually jokes about his own death to a companion, noting that “it is considered useful and enlightening and therapeutic to think about death for a few minutes a day” and that he doesn’t want anyone to fuss about his death “unless it could provide entertainment value in a perversive, subversive way.” (His idea? Putting his body through a woodchipper and spraying it in the middle of Harrods.) His voiceover even warns us early into the film that “you’re probably gonna find out about it anyway, so here’s a little preemptive truth-telling: There’s no happy ending.”

We, the audience, of course, know this. In June 2018, Bourdain died by suicide at age 61, an event that shocked and stunned the world. Three years later, there’s still so much that we don’t know about Bourdain’s death—and so much that not even Roadrunner is able to answer. But what Roadrunner does, warts and all and through the lens of those who knew him best, is give us the space to process a loss that still hurts for so many people while painting a vast and messy portrait of Bourdain.

For many of the people who knew him—ranging from his producers and TV crews to fellow chefs, musicians, and family members—their grief is still close to the surface. Some of the participants are initially wary about speaking to Neville. Ottavia Busia-Bourdain, Bourdain’s second wife, flat-out says that this will be the last time she’ll ever publicly talk about Bourdain. They praise Tony (as they all call him), but they also curse him; at one point, chef David Chang’s eyes well up with tears recounting a hurtful email from Bourdain, even as Chang acknowledged that Bourdain was probably projecting his own self-doubts onto Chang.

Those interviews, which reveal both the best and worst of Bourdain’s inclinations (some of which are born out of similar places), are raw. Some of the subjects choke up or start to cry as they talk about Bourdain’s life, and they’re hurt by both his words and actions. At times, it feels like we’re getting a voyeuristic view of someone’s therapy session. But perhaps it’s also a more honest portrait than we’re used to seeing. Roadrunner traces his journey from an unlikely bestselling author to an unlikely host of a travel TV show to an unlikely storyteller whose lens could operate like a moral compass, each accompanied by a treasure trove of unseen footage, some of which date back when Bourdain was promoting Kitchen Confidential in 2000; the footage was filmed for an unreleased documentary by photographer Dmitri Kasterine.

It also gives us a side of Bourdain we didn’t really get to see, one who seemed to be content at home—those rare times when he wasn’t traveling the world with a camera crew, which could take up as much as 250 days of the year filming—with Busia-Bourdain and his young daughter. But, depending on which video you glimpsed, Bourdain could be completely on one minute, and in the next, questioning whether he’s doing any good to the people and places he visits.

Bourdain describes his success as something that happened “literally overnight” and “fell into my lap,” and he might point to the expansion of his career as additional aspects of that. Bourdain got started in television after producers Lydia Tenaglia and Christopher Collins suggested turning his next book into a TV series even though Bourdain had never hosted anything before and took a few episodes (and a life-changing trip to Vietnam) to figure things out; that venture would lead to future shows on the Travel Network and CNN, each of which became less about the food and more about the people he met there.

Often, like with the episode of No Reservations shot in Beirut that would ultimately change the way he approached the show, what he saw and experienced (often, the result of U.S. imperialism) would profoundly affect him. While Bourdain would argue that he wasn’t a journalist, an advocate, or an educator, his mentor, chef Éric Ripert, felt otherwise, with Ripert noting that “he was a storyteller and he didn’t realize, I think, how political he was.”

Perhaps the best storyteller of Roadrunner is Bourdain himself, who offers concise and self-deprecating insight that cuts much deeper than anyone else could; his narration often has an eerie prescience to it.

In the week leading up to Roadrunner‘s release—and well after many critics, including this one, had already seen the film—Neville revealed he created an A.I. model of Bourdain’s voice, a process that involved working with four different companies and about a dozen hours of Boudain’s audio, so Bourdain could read three quotes that he wrote during his life but never said aloud. One of those quotes was an email he wrote to the artist David Choe where Bourdain asked Choe if he was happy.

According to Neville, Bourdain’s estate was on board with the A.I. voice. “I checked, you know, with his widow and his literary executor, just to make sure people were cool with that,” Neville told GQ. “And they were like, Tony would have been cool with that. I wasn’t putting words into his mouth. I was just trying to make them come alive.” To The New Yorker, Neville said, “If you watch the film, other than that line you mentioned, you probably don’t know what the other lines are that were spoken by the A.I., and you’re not going to know. We can have a documentary-ethics panel about it later.” (Busia-Bourdain has since gone to Twitter to say that “I certainly was NOT the one who said Tony would have been cool with that” in response to Neville’s assertion to GQ.)

It’s dicey, to say the least. It’s an editing choice—and very much an ethical one—that might open up a can of worms as to what using this technology could mean for other documentaries down the line. It could take away some of the film’s impact of Bourdain’s own words telling his story as viewers might then wonder what other lines of dialogue were created this way. It’s also a choice that leaves me feeling somewhat unsettled after the fact. But Neville’s choice to use an A.I. of Bourdain’s voice isn’t the only ethical quandary present in Roadrunner. The other is much more in your face in the form of how the film frames Bourdain’s relationship with Asia Argento. Argento isn’t interviewed at all, a deliberate choice by Neville; in an interview with the Hollywood Reporter last month, Neville called the final days of Bourdain’s life “narrative quicksand” and noted that if “you get into the she said, he said-ness of what happened, it asks a hundred other questions and doesn’t get you any closer to understanding him.”

That doesn’t mean that Argento isn’t entirely absent in Roadrunner. She’s presented as yet aspect of Bourdain’s life that he wholeheartedly threw himself into, a quirk of his addictive personality that included both positive and negative vices. His production crew described an environment that was rife with tension and friction, especially when Argento stepped in to take over a shoot at the last minute that resulted in Bourdain firing a longtime cinematographer after the latter clashed with Argento during the shoot.

The dissection of Bourdain’s final days and the relation of those final days to tabloid headlines involving Argento inches uncomfortably close to posing the question of blame. But Roadrunner swerves, going out of its way to put the onus of Bourdain’s death solely on Bourdain and wonder about the signs they missed.

Bourdain’s life and how it ended have no easy answers; Roadrunner complicates that even further. But what it does is provide us with a bit of therapy and catharsis: We still might not know the answers and Roadrunner might still leave us juggling a lot of complexities about Bourdain, but perhaps now we might get a little bit of closure.

Roadrunner: A Film About Anthony Bourdain is now in theaters.