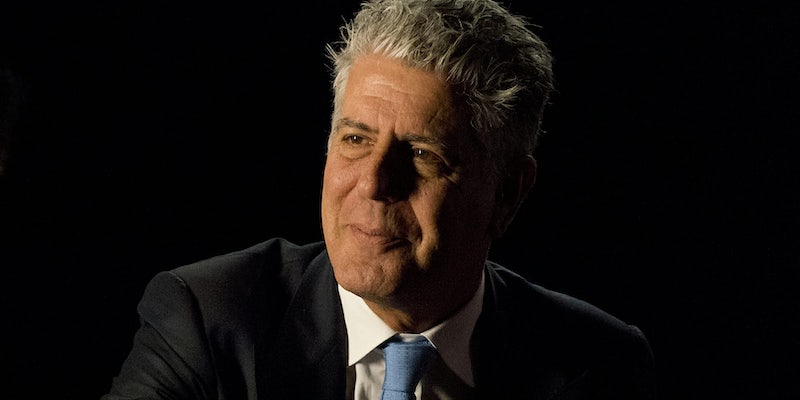 Bourdain was in France for an upcoming episode of 'Parts Unknown.'

Bourdain was found unresponsive in his hotel room Friday morning by his close friend, French chef Eric Ripert. Bourdain was in France working on an episode of the CNN food and travel series he hosted, Parts Unknown.

“It is with extraordinary sadness we can confirm the death of our friend and colleague, Anthony Bourdain,” CNN said in a statement on Friday morning.  “His love of great adventure, new friends, fine food and drink and the remarkable stories of the world made him a unique storyteller. His talents never ceased to amaze us and we will miss him very much. Our thoughts and prayers are with his daughter and family at this incredibly difficult time.”

Bourdain’s stardom in food and media launched in 2000 after his best-selling book, Kitchen Confidential: Adventures in the Culinary Underbelly. From there, he explored the human condition with food and travel through his books and TV shows, including A Cook’s Tour, Anthony Bourdain: No Reservations, and Parts Unknown, often advocating for marginalized communities.

Across Twitter, CNN colleagues and fans of Bourdain’s work mourned the news of his death while promoting resources for people having suicidal thoughts or contemplating suicide. Bourdain’s death follows the suicide of fashion designer Kate Spade, who was found having hanged herself in her New York apartment on Tuesday.

Anthony Bourdain could have done a lot of things with his success but he used it to think about what it means to live with each other. RIP

Here is Anthony Bourdain with a group of children in Gaza. Thank you for shining your light on the dark places. pic.twitter.com/225CETUQZd

Never gonna stop wondering why, though.

My heart is with you, wherever you are. Sending strength to your daughter.

Anthony Bourdain is gone. I never ate his food, but always admired his impeccable storytelling. If you are having thoughts of suicide, please call the National Suicide Prevention Lifeline at 1-800-273-8255 (TALK) or go to https://t.co/tt6AhshjeL. Please. https://t.co/Lp4SFaRaL0

RIP Anthony Bourdain, a man who was as honest and fearless in his words as he was in his travels. You were a real one. pic.twitter.com/uWU3k4yRkF

This is so awful.

Anthony Bourdain, 61, has died. He took his own life.

He was in France working on an upcoming episode of his award-winning CNN series. His close friend Eric Ripert, the French chef, found Bourdain unresponsive in his hotel room Friday morning.

Floored and heartbroken by suicide of Anthony Bourdain. His show was one of the smartest and most thought-provoking. One of the few places on cable news that celebrated our common humanity. Rest in peace. America, it is time to ask what is behind the crushing suicide epidemic.