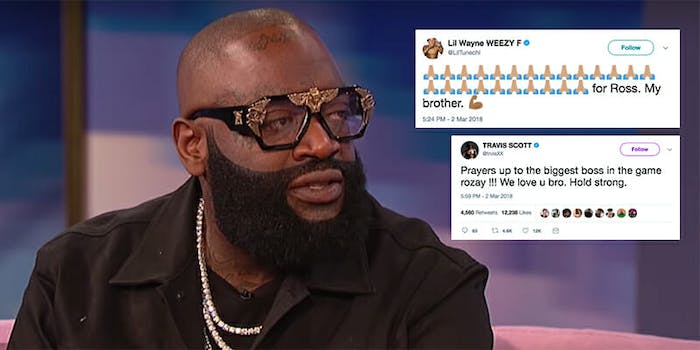 Rick Ross reportedly hospitalized, on ‘a form of life support’

TMZ reported Friday that rapper Rick Ross had been hooked up to “a form of life support” after being found responsive.

According to the report, Ross, 42, was found in his Florida home by emergency responders and taken to a Miami hospital where he was treated for respiratory issues. TMZ’s report indicates Ross could have had a heart attack because he was being treated in the cardiac unit.

Police responded to a 911 call for a “person in distress” that was taken seriously because Ross has a history of seizures, according to the Blast.

Ross was being treated with extracorporeal membrane oxygenation, a form of life support in which blood is oxygenated outside of the body, TMZ reported.

Prayers up to the biggest boss in the game rozay !!! We love u bro. Hold strong.

Everyone pray for my buddy @RickRoss to get well soon!