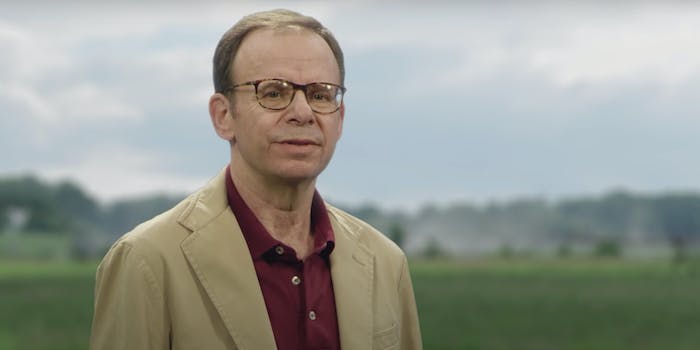 The NYPD released a video of the attack hoping to get tips on the attacker.

Actor Rick Moranis was punched by a stranger in New York City’s Upper West Side Thursday morning in what has been described as a random attack.

The attack, which was captured on surveillance video and released by the NYPD Thursday night, shows a man wearing an “I Love New York” hoodie punching another in the face and falling to the ground. While the identity of the victim was obscured in officially released footage, the NYPD and a spokesperson for Moranis have both confirmed that Moranis was the person who was attacked.

“Rick Moranis was assaulted on the Upper West Side yesterday,” a spokesperson for Moranis said in a statement sent to the Los Angeles Times. “He is fine but grateful for everyone’s thoughts and well wishes.”

According to the NYPD, Moranis went to the hospital after the attack with reports of pain to his head, back, and hip before reporting the crime to police.

Moranis, who’s starred in films like Ghostbusters, Little Shop of Horrors, Spaceballs, and Honey, I Shrunk the Kids, spent more than two decades in retirement after his wife’s death until he made a recent appearance in an ad with Ryan Reynolds. But that doesn’t mean that Moranis is any less beloved by fans. As news spread of the attack on Moranis, fans and fellow actors shared their shock over the attack on Moranis and wished him a speedy recovery.

Others called for the alleged attacker to be apprehended—and even invoked a fictional character or two to help make it happen.

The search for the man who punched Moranis is ongoing.