Richard Dreyfuss wants to know why he doesn’t have 100,000 Twitter followers

His son had some good advice.

Richard Dreyfuss has so much positivity in his life. He’s an Academy Award winner, and one of the greatest actors of his era. He’s got kids who love him. And he sometimes has a kickass little mustache.

But, like the rest of us, Dreyfuss doesn’t have EVERYTHING he wants. And what Dreyfuss wants but doesn’t have was made evident Tuesday. The dude simply wants an even 100,000 followers on Twitter, and as of Tuesday night, he only had about 93,500. Thus, he bitched about it. Luckily, his son, Ben, tried to help.

@bendreyfuss why don't i have a hundred thousand followers yet

Good answer. Unfortunately, that means Richard Dreyfuss is going to have to do a little work and find some shit in the garage. And the great thespian is certainly not interested in that.

Again, Ben tried to help, but by that time, Richard had caught on to his motives.

you sent me two photos. one of emily and me and the other one is my wedding photo. you know your mom and i got a divorce right?

This is the only framed photo @bendreyfuss has. He's 30. "I get it, I get, you wish your mom & me stayed together" pic.twitter.com/J9PlDcwSE0

Dreyfuss, though, did have one good story to tell.

A long time ago John Travolta brought me a script called Pulp Fiction. He was unsure & asked my thoughts. I said, "if you pass, I'll do it"

But other than that, it appears as though Dreyfuss might have to wait a while to break the magic 100K barrier. Especially if this is his strategy. 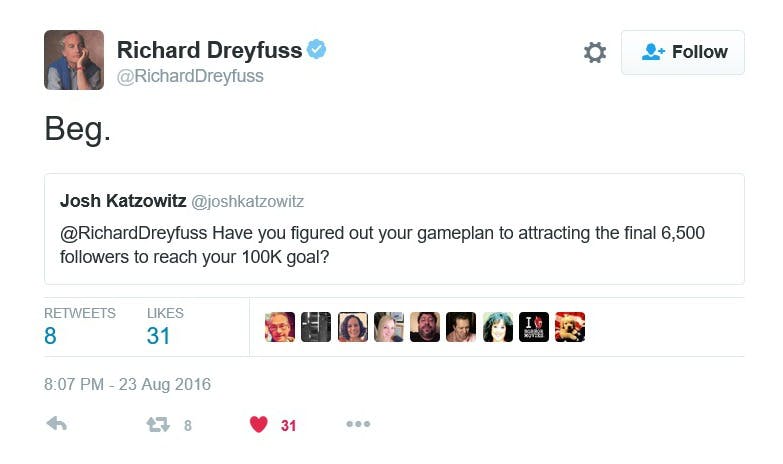