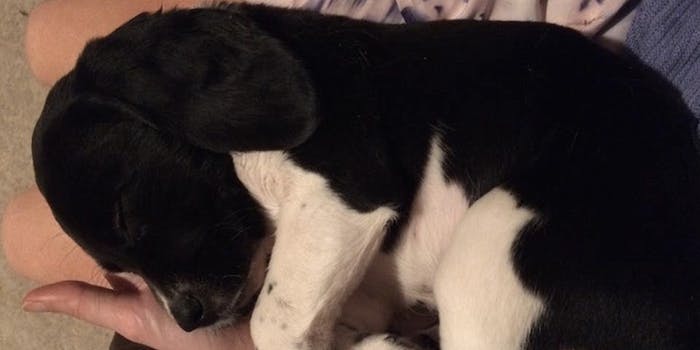 Girl gets the 100,000 retweets she asked for, thereby securing adorable puppy

She got some help from a certain celebrity.

It’s only been four days since we reported on Clara Foster, the high school senior whose dad promised her a puppy if she could get 100,000 retweets. She needed 70,000 more retweets, and we speculated that it was only a matter of time before she reached her goal.

Well, that didn’t take long! She crossed the 100,000 RTs mark on Thursday, thanks to a bit of celebrity assistance.

Jared Padalecki, of Gilmore Girls and Supernatural fame, has a huge and dedicated following online, so when he retweeted Clara on Thursday, it put her viral puppy-wanting campaign over the top.

The increased attention has come with some concern trolling; people have suggested that the decision to adopt an animal shouldn’t be made based on an arbitrary number of retweets. But chill with the Internet outrage, my friends, because Clara has thought this through.

She told the Daily Dot earlier this week that, although she’s going off to college, she and her family will make sure the puppy is taken care of. And the new family member will be filling the hole in their hearts after their dog of 13 years passed away recently.

“We had talked about maybe having the dog stay with my cousins in Oklahoma, where I will be attending college, so that was how I got my dad to agree to the whole retweet thing,” Clara wrote.

She added that the puppy in her Twitter photo isn’t the exact dog she’ll be adopting—that one already has a home—but she’s looking at a dog from the same litter. If that doesn’t work out, she’ll adopt from a shelter.

We reached out to Clara to ask whether her dad intends to follow through on their deal, and we’ll update if we hear back.

Update 12:43pm CT, March 18: Clara is indeed getting a puppy. “Yes I am definitely getting the puppy!” she told the Daily Dot. “Right now the puppy is in Oklahoma with my cousin and we are trying to figure out how to get her down to Houston to bring Olly to me now! She is hopefully coming next weekend because I want to get my puppy as soon as possible. :)”