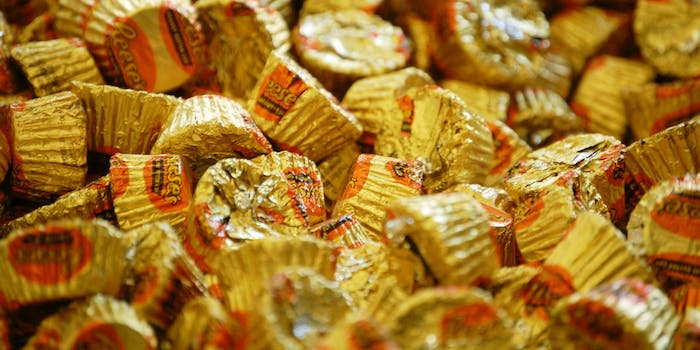 But let's be real, you'll probably still eat these.

They say that once you fail, you just have to dust yourself off and try again. But honestly, Reese’s should probably just stop attempting to make seasonally shaped candies.

During the 2015 holiday season, the candy company attempted to get a little festive and churned out what they called the “Reese’s Peanut Butter Tree.” But people weren’t all that happy with the execution.

ah, the fabled blob tree. truly the most majestic of foliage. @ReesesPBCups pic.twitter.com/jj24RvBnH4

And they obviously didn’t learn their lesson. Just in time for Valentine’s Day, the confectioners have created “Reese’s Peanut Butter Hearts.” Which have ended up looking exactly like the tree-blob-turds.

It's a tree.. It's a heart.. It's a.. A whole lotta peanut butter & chocolate-y goodness! @ReesesPBCups #reesesheart pic.twitter.com/i354GDbj3G

The thing is, these aren’t totally not heart-shaped. The effort’s there, with the two curves that meet to make the top of the symbol, but it’s definitely not the prettiest. And while you could see a heart, you’d also most definitely see a piece of fecal matter or various other shapes. Meanwhile, some people are pretty confident in Reese’s heart design.

I don't know what everybody's complaining about. I think the Reese's Heart looks pretty spot on. pic.twitter.com/TQl0DMM4sc

They’re going to taste like Reese’s no matter what they look like. It’s what’s on the inside that matters, right? And the company stands by that.

@thebigwhitewolf Our hearts may beat to their own rhythm, but they still have that perfect taste.