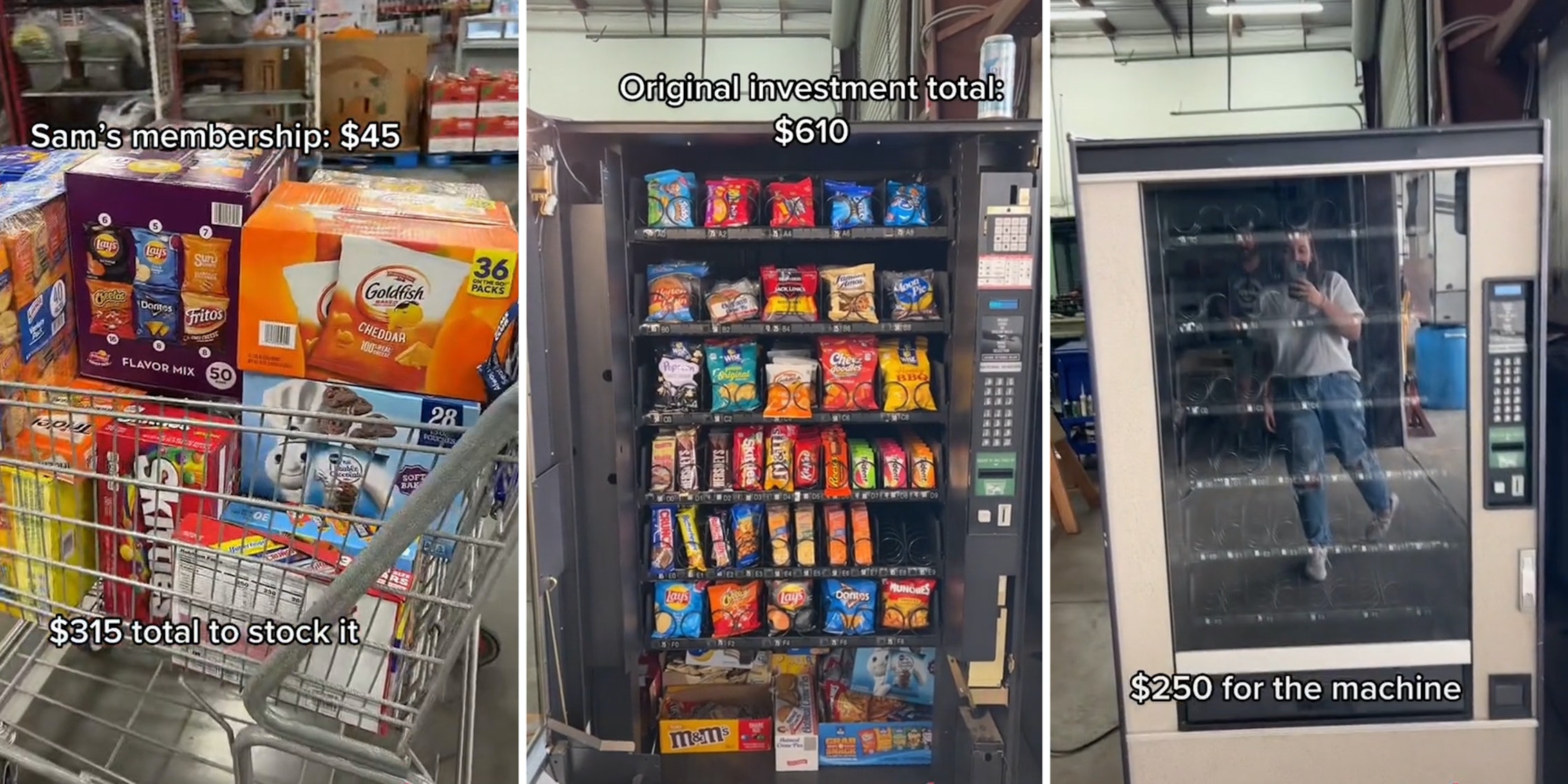 ‘Ive been wanting to do one of these so bad’: TikToker shares reality of owning a vending machine

With the rise of “hustle culture” has come a growth in side hustles—businesses operated in parallel to one’s 9-to-5 designed to bring in extra cash. These range from simple schemes like flipping goods from thrift stores to setting up full drop-shipping operations.

One of the more interesting side hustles to permeate the internet is vending machines. In recent months, users across the internet have gone viral after sharing their stories of opening and operating vending machines in strategically placed areas, which they claim earn them a substantial amount of money.

Now, another user has gone viral after showing the reality of owning a vending machine. In a video with over 2.5 million views, TikTok user Jade (@jadedavis0802) details the total cost of the machine and her first fill. The machine is later placed at her fiancé’s workplace.

In the video, Jade claims she and her fiancé purchased the vending machine for $250 (the couple got a deal after the person at her fiancé’s workplace who previously operated the machine decided he “didn’t want to do it anymore,” per a recent video). Used and refurbished vending machines typically go for around $1,200 to $3,000, states Businessnes.

From there, the couple went to Sam’s Club and stocked up on goods to fill the machine. The total cost of their haul was $315. Factoring in other costs, such as the couple’s Sam’s Club membership, Jade puts the total initial investment at around $610.

Fast-forward a few weeks, and Jade and her fiancé went to check in on their machine.

After about three weeks, their gross revenue from the machine was $153.60.

Although it’s difficult to determine the couple’s net profit as they do not give exact figures about how many of each item sold, Jade says that seeing which items sold and which didn’t will allow them to better tailor the machine to customer demand. From there, the couple seems confident that the machine will eventually reach profitability.

Commenters supported the couple’s endeavor, with many saying they wanted to get in on the business themselves.

“Ive been wanting to do one of these so bad but with like non conventional items,” shared a user.

“I might put one on my front porch for all the amazon and FedEx guys,” joked another.

“My dad did this after he retired! He has about 10. Loves it, works little and loves visting with the biz owners! Congrats!!!” exclaimed a third.

Further users had advice on how to increase their profit margins.

“Next step is to get an llc and a business license so you can buy snacks wholesale,” suggested a commenter.

“If you’re going to be buying from there all the time, upgrade your membership so you get money back,” offered a commenter. Others agreed; one user wrote, “This is the best!!! I haven’t purchased a membership in years because I earn enough each year to cover it.”

Jade said in the comments section they are now soliciting advice from TikTokers about which items to stock as well as looking into a card reader for the machine.

Update 6:05am CT, Nov. 3: In a TikTok DM exchange with Daily Dot, Jade said the project is mostly for fun, not profit.

“We took this on as a fun project for us to do as a couple to kinda get away from the stress of wedding planning, work-life hustle and bustle, etc. So we do not really have any expectations for it because we have no clue how well it will actually do,” she wrote. “…It’s hard to make any kind of projection until we get a better understanding of the market.”

She also responded to some commenters.

“Many people have been concerned about our pricing. We primarily took this over so that the workers at my fiancés job would still have their snack machine,” she explained. “Even though prices are low, we are not driven by money. We obviously would love to make some money and definitely would like to break even, but at the end of the day we want to maintain this and offer a variety of snacks to help his coworkers throughout the day! We will slightly raise our prices as time goes on, but we do not plan to completely gouge people just to make a little extra money.”