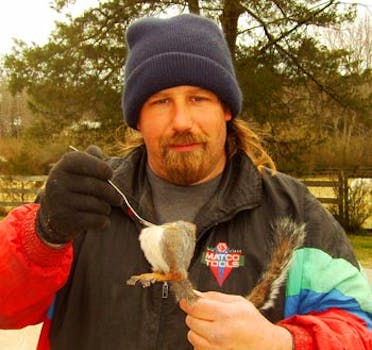 The supposed “Christian Conservative”  shares a profile picture with the subject of a satirical essay on "Upscale redneck cuisine."

Chet Walken’s racist verbal sludge has made him the most-hated man in Britain.

A week ago, the supposed “Christian Conservative” from Houston, TX enraged the British Twittersphere with racist tweets about a soccer player who’d suffered a heart attack mid-game. British Twitterers have since continued to hurl an onslaught of abuse his way on a daily basis.

But is @Walken4GOP just a troll?

English blogger Alex Botten was probably the first to point out what should have been obvious to everyone (including me). “Yep,” Botte wrote. “@Walken4GOP is a fraud.” The evidence? Whoever is behind the account nabbed the profile pic from another site. The goateed mug that has become the face of American racial hatred on Twitter actually comes from this satirical essay on “Upscale redneck cuisine.”

If the photoshopped squirrel-on-a-stick doesn’t tip you off to the satire, the caption should: “Most rednecks love fresh squirrel,” it reads. We suppose it’s possible that Walken is the very same person that the author of “Upscale redneck cuisine” chose to mock with that photograph. It’s about as likely as your average racist jerk winning the lottery, however. 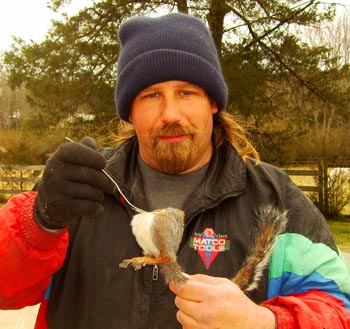 Others discovered another Twitter account with a similar modus operandi. Rev. Keith Roberts (@GodsLandGodsLaw) claims to be a “Conservative Christian fighting to take America back from the clutches of the commie socialists.” He spews the same kind of expletive-laden racism that has made Walken infamous. Read one of his recent Tweets: “One day we will look back at abortion like we do on ni**ers: with disgust #tcot #prolife”

Are both accounts run by the same troll? It seems likely (“Obvious troll is obvious” observed one Twitterer). The style is certainly similar, but we’ll never know for sure unless someone steps forward. Both appear to be perfect examples of Poe’s Law, at any rate. That’s the Internet maxim coined in 2005 by writer Nathan Poe, who stated: “Without a winking smiley or other blatant display of humour, it is impossible to create a parody of fundamentalism that someone won’t mistake for the real thing.”

Assuming both @Walken4GOP and @GodsLandGodsLaw are trolls, their goal seems obvious: Smear Republicans in general and conservative Christians in particular. Both accounts are effusive in their support of Republican presidential candidates and frequently tag their tweets with conservative hashtags like #TeamSantorum and #Romney2012.

The accounts could be run by real racists trying to hide behind pseudonyms and phony profile pics. More likely: Someone is trying to smear conservatives with bad racist satire. That takes the racist bile to a different type of awful entirely.

We don’t need satire to know there are real people with opinions just as nasty as “Chet Walken” and  “Rev. Keith Roberts.” No one doubts it. But there’s no need to co-opt their racism to prove a sleazy political point. Let the world judge hate speech at its naked, stupid worst: As it’s actually uttered, by real racists.