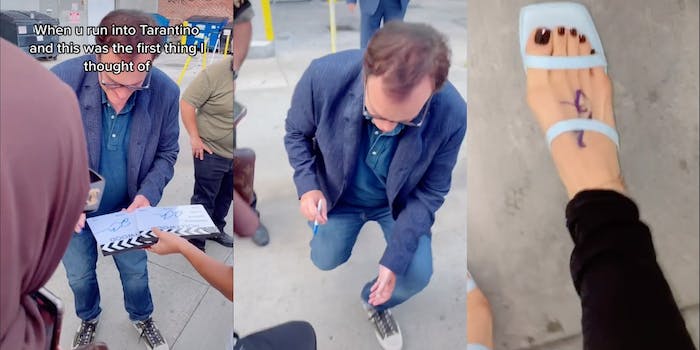 Video: Quentin Tarantino signs, rates foot, and TikTokers were ready with the jokes

A viral TikTok video shows him signing—and politely declining to rate—a fan’s foot. The TikTok, posted by SHER or @dezertflake, has garnered about 2.6 million views and 320,000 likes. Her on-screen caption reads, “When u run into Tarantino and this was the first thing I thought of.”

Tarantino, best known for directing Pulp Fiction and Reservoir Dogs, can be seen in the video moving his way down a line of fans waiting for autographs. When he gets to Sher, she asks, “Do you mind signing my foot?”

“Sure, OK, cool,” Tarantino said, chuckling as he dropped down to grab her foot.

As he signed, Sher asked him what he thought of it, adding, “Can you rate it?”

Tarantino couldn’t help laughing, saying, “Oh no, I wouldn’t rate it—but it would be at the top.”

One commenter under the video didn’t mind rating it, though. “Okay not even tryna be weird but i would rate it 10/10 that pedicure looks fresh,” they said.

Sher and Tarantino shared a laugh before the next cut of the video shows Sher walking away in heels, proudly flaunting her signed foot.

Viewers were equally at a loss—many couldn’t get over how good humored Tarantino was.

“He seems so nice!” one said. Another commented, “why does he actually seem nice.”

Others took the TikTok as an opportunity to crack some easy jokes.

“‘Would you mind…’ you’re actually the one doing him a favor,” a comment read.

One user put it best: “She a legend for this one.”