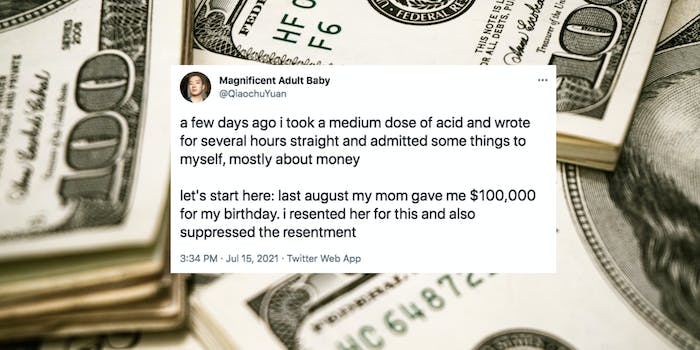 ‘She what’: Rich guy on acid’s tweetstorm about getting $100K from his mom sparks debate, outrage

Twitter users were split on how to feel after a man posted a 35-tweet thread about his resentment toward his mother after he was gifted $100,000 for his birthday.

Qiaochu Yuan uploaded the thread on Thursday and wrote about how he grappled with his complicated feelings after receiving the money and what he was deciding to do with it. Some Twitter users were upset that he was having a moral dilemma after receiving such a large amount of money and posted about it on Twitter. While others applauded him for taking accountability in recognizing his immense privilege.

The thread currently has over 1,100 likes and over 2,000 quote-tweets— which allows users to retweet and add a comment.

In the Twitter thread, he began by saying he had recently taken a dose of acid and had confronted some hard truths he refused to accept.

“I wrote for maybe 12 hours straight and it eventually turned into a sort of spontaneous dialogue between the person I am on acid and the person I am sober; acidQC and soberQC,” Yuan wrote.

He continued to explain that acidQC “told him” that “you’ve been feeling social pressure to pretend like you have a ‘financial health’ that is entirely about your savings and your income and it’s just not true at all. the truth is that if you ran out of money your parents would send you more because they love you.”

Yuan went on to compare himself to Harry Potter and wrote that on top of the $100,000 gift his parents paid his $175,000 MIT tuition out of pocket, as well as his living expenses in college and grad school.

As soon as the thread was posted, it quickly began receiving hate from people on Twitter that felt it was “weird” that he would write about this on Twitter.

“Repeat after me: ‘I will not do acid and then post my ‘realizations’ on Twitter,'” one Twitter user quote-tweeted saying. Another person responded in defense of Yuan saying, “The funniest thing about all the QTs saying they hate you while asking you for $$$ is that they all have the same neuroses and resentments around money but not the self-awareness to recognize and work on them.”

Yuan clarified why he wrote the thread in a follow-up tweet he posted on Friday. “In case people are still confused, last night I got something like a dozen DMs from people, maybe half of them strangers, being like ‘thank you for writing the money thread,’ several ‘I’m in this position too and it’s so hard to talk about,'” he wrote. “That’s who I write these threads for.”

Yuan did not immediately respond to the Daily Dot’s request for comment.