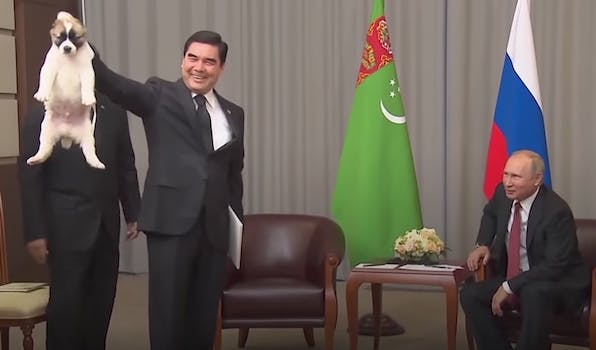 Putin gets a puppy, and we have a lot of feelings about it

Turkmenistan's President gave Putin a puppy for the Russian President's birthday during talks in Sochi. See more via @ReutersTV pic.twitter.com/Kr8Z8CGYGR

This isn’t the first puppy that Putin has received as a gift. In 2010 he was given a Karakachan puppy, which he named Buffy, from the Bulgarian prime minister. Putin also has an Akita dog named Yume. It seems that Putin has a soft spot for dogs.

But the handoff of the new puppy was super weird. Why is Berdymukhamedov holding the animal like it’s covered in dirt? Yes, it’s normal to pick up a small puppy by the scuff of its neck. But this was a photographed event. It was an awkward and weird way to present the puppy to Putin.

Putin handled the puppy with more care. He cradled it in his arms and kissed it before letting it walk around. Some people thought Putin’s reaction to the puppy made the Russian leader appear more tender.

I like the "kiss" he gave the puppy. That was awesome, to see a sensitive side of Putin.

Other people were worried about the puppy’s safety.

Narrator: He ate the puppy https://t.co/2aDKpf7kZ0

The whole scene was an easy set-up for jokes about the relationship between Putin and President Donald Trump.

What a wasteful gift. Putin actually doesn't need another puppy. He already has a lap dog. It's called Donald Trump

Wonder why Putin got another puppy, he already has a lapdog named Donald. https://t.co/hcfrrFyRmc

Don't be jealous, @realDonaldTrump! You may not be as cute, but you'll always be Putin's #1 lapdog. https://t.co/8NqleOhJv5

Verny is an albai pup by the way, a shepherd dog native to Turkmenistan.