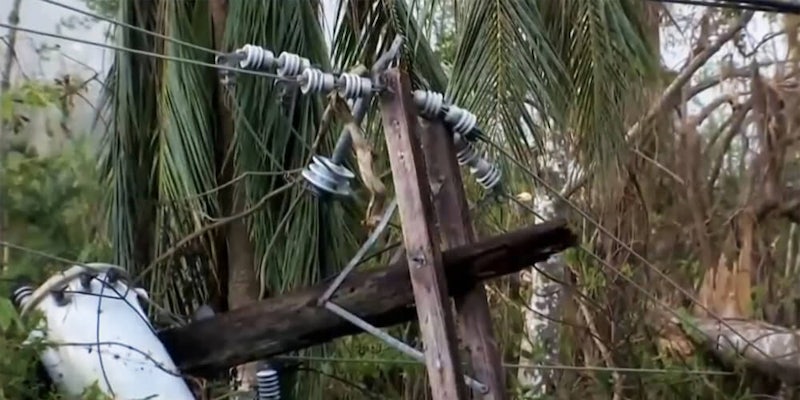 As the island lost power, users tweeted through the natural disaster with gallows humor.

A massive, 6.4-magnitude earthquake struck the southwestern coast of Puerto Rico early Tuesday morning—leaving at least one reported dead and much of the island without power. The earthquake was the latest, and most severe, in a series of quakes and tremors that began hitting the island on Dec. 28, and the second consecutive in as many days.

According to the United States Geological Survey, the quake was recorded at approximately 4:24am local time, and there have since been at least 20 aftershocks in the area. This latest natural disaster comes as Puerto Rico is still recovering from 2017’s devastating Hurricane Maria, which had already compromised older buildings as well as the power grid.

Mayor Mayita Meléndez, of the southwestern city of Ponce, Puerto Rico, told the New York Times that many homes had been completely destroyed and residents are terrified—particularly those who live near the beaches and now fear the threat of tsunamis.

“It’s not safe,” she said, “the earth is moving constantly.”

Yet, as Puerto Rico braces itself for the continued threat of quakes, some are coping with the ongoing threat in a less conventional way. After having been startled out of sleep by the ground literally moving underneath them just before dawn, many residents responded to the rude wake up call with memes—as the hashtag #TemblorPR began trending on Twitter.

“Why is our piece of tectonic plate dancing the maCARENA AT THIS UNGODLY HOUR,” wrote one user, along with a freaked out SpongeBob meme.

why is our piece of tectonic plate dancing the maCARENA AT THIS UNGODLY HOUR #TemblorPR pic.twitter.com/ISMFjTZK1n

Others in Puerto Rico responded with Jurassic Park, The Joker, and Wendy Williams memes—just to start.

i just wanted some nice and uninterrupted sleep but i got a heart attack instead #TemblorPR pic.twitter.com/TEKQbLfd2U

“Citizen security is a priority, so vulnerable areas are being inspected and all necessary measures will be taken to ensure the safety of all Puerto Ricans,” she said in a statement on Tuesday morning.

“[Puerto Rico] has never been exposed to this kind of emergency in 102 years.”