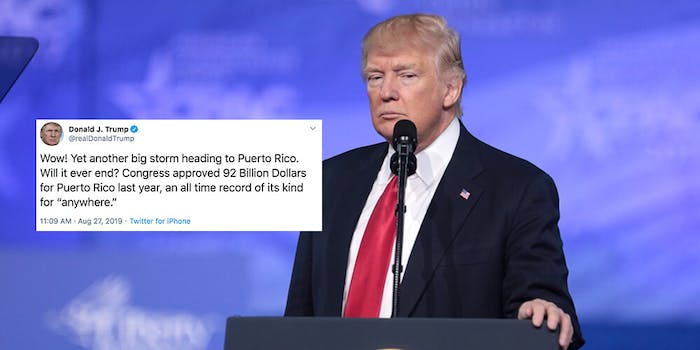 Is he blaming the island?

As of Tuesday afternoon, Tropical Storm Dorian is in the Carribean, with winds of 55 mph, on a northwestern trajectory that could send it toward Puerto Rico.

Given that it’s hurricane season in the Atlantic right now, and Puerto Rico is an island in the Atlantic, it’s no surprise that it could get battered by a new storm.

But President Donald Trump, still apparently aggrieved that Puerto Rico was hit by the utterly devastating Maria 2017, basically asked the island why it keeps hurricane-ing itself.

Wow! Yet another big storm heading to Puerto Rico. Will it ever end? Congress approved 92 Billion Dollars for Puerto Rico last year, an all time record of its kind for “anywhere.”

“Will it ever end?” Trump asked, seemingly referring to the responsibility to help places in the U.S. potentially recover from natural disasters.

Trump was frequently frustrated and upset with having to help Puerto Rico in the wake of Maria, the kind of anger and annoyance that didn’t manifest itself when Trump was helping Texas recover from Hurricane Harvey. In the wake of the disparate responses, many people called Trump’s response racist.

Now, people are appalled that Trump would respond to a possible natural disaster with such a tweet. Others also pointed out how he much the president was misrepresenting the money Puerto Rico received in aid after Maria.

The figure is nowhere near the $92 billion Trump cited. The government approved $40 billion, but only one-fourth of that has been spent so far.

At least one person just hoped Trump wouldn’t try to nuke the storm.

Hey @realDonaldTrump, please don't use a nuke to stop this storm. That's not what a bomb cyclone means.

Also, you're lying again about disaster aid to Puerto Rico. While it's true the hurricane caused more than $90b in damage, Puerto Rico only received about $15b as of June. https://t.co/K5XpngBWv9

45 lies. Puerto Rico did NOT get $92B "last year"
•$92B is due incrementally over next *20 years* & ~$11B has been delivered
•3,000 Americans died due to Federal Govt failures
•45 continues to deny the Climate Change behind these massive hurricaneshttps://t.co/MLTCEVryb6 https://t.co/GweC7jZqxe

What are you going to do, throw more paper towels into a crowd of people who lost their families and friends?

An island full of American citizens that is still recovering from a storm that took between 1,500 and 3,000 lives is bracing for another storm, and the President is using it as an opportunity to lie *for at least the 5th time* about how much aid they've received https://t.co/wrKr0JHkSu

You're shaming Puerto Rico for being in a storm path?!!!

Mr. President, go FUCK yourself with a nine iron. https://t.co/AeGT5erL9L

According to a report from Weather.com, a patch of dry air stands between Dorian and Puerto Rico and may prevent the storm from reaching hurricane strength.