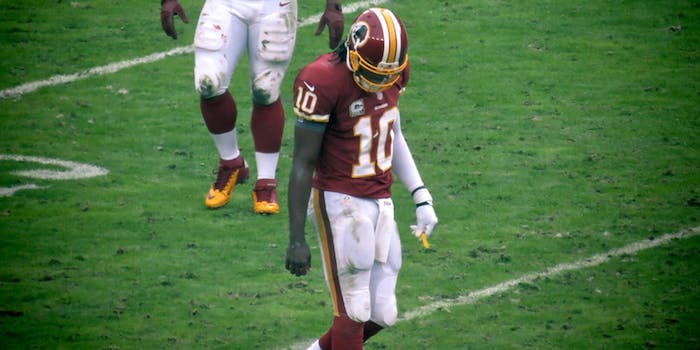 Why the Washington Redskins still stubbornly cling to racism

Why can't Dan Snyder and the Redskins admit they were wrong? Here's the psychology behind it.

Over this past weekend, Attorney General Eric Holder joined the ranks of the increasing number of Americans who wish for the Washington Redskins NFL franchise to change its name, arguing that it denigrates Native Americans. Holder said during an ABC News appearance that “the Redskins, that organization is a great one.” Holder continued, “It’s a team with a storied history that has huge amounts of support in Washington, D.C., and in the 21st century they could increase their fan base, increase their level of support, if they did something that from my perspective that is so obviously right.”

Holder is just one of an increasing number of U.S. politicians and public figures who’ve joined the charge to eradicate one of modern sports’ most embarrassing continued errors. While there have been similar conversations about the Cleveland Indians, or the University of Illinois’ Chief Illiniwek, the Redskins’ situation differs in two respects: that owner Dan Snyder has repeatedly and vehemently refused to hear discussion about changing the team’s name and insignia and that neither of those other cases concerned a profitable NFL franchise titled after what’s been historically established as a racial slur.

Esquire writer Baxter Holmes, a man of Cherokee and Choktaw descent, illustrated this best with a story told to him by his mother:

The story in my family goes that the term dates back to the institutionalized genocide of Native Americans, most notably when the Massachusetts colonial government placed a bounty on their heads. The grisly particulars of that genocide are listed in a 1755 document called the Phips Proclamation, which zeroed in on the Penobscot Indians, a tribe today based in Maine.

Spencer Phips, a British politician and then Lieutenant Governor of the Massachusetts Bay Province, issued the call, ordering on behalf of British King George II for, ‘His Majesty’s subjects to Embrace all opportunities of pursuing, captivating, killing and Destroying all and every of the aforesaid Indians.’ They paid well—50 pounds for adult male scalps; 25 for adult female scalps; and 20 for scalps of boys and girls under age 12. These bloody scalps were known as ‘redskins.’

The easy reaction to such a story is, hopefully, empathy. Why name a sports franchise (particularly one in the negative national spotlight right now for the increasingly well-known effects of long-term injury) after a public atrocity? While, as Holmes notes, some cite articles about skin pigmentation and the like to counter the racialized aspects of this discussion, it’s not melanin that most immediately think of when thinking about “Redskins.” It’s bloodshed—and violence.

It’s also just a terrible team name. Where most NFL franchises invoke imagery of majestic animals (Bears, Eagles, Lions) or brave and grizzled rebels (Raiders, Buccaneers) or even just total nonsense (what is a Charger, actually?), the Redskins’ name just means “people of different skin color.” It’s not a particularly distinct name for a football organization, and the fact that it has a long-running history of being racist against a people already done frequent disservices in many parts of this nation to this day should ostensibly mean that its eradication and replacement with one of the great many other possible franchise logos in the world would be a no-brainer.

And yet, you hear with frequency of the vehement opposition to it. In response to Senator Harry Reid’s gathering of 50 acting Senators to implore the franchise to change its name, team president Bruce Allen issued a statement, online and elsewhere, about how the team is simply misunderstood and will not go back on Snyder’s promise to maintain the franchise for the sake of its fans and the team’s history. Allen writes of how Native Americans polled allegedly don’t find the name offensive (nor do most Americans, as it were), how the team is an important force in the D.C. area, and how, indeed, the Smithsonian traced the term’s lineage back to its origins as a descriptor rather than a slur.

But language changes, as do people, Dan Snyder notwithstanding. Where “redskin” may once have carried different meaning, Holmes and a great many other writers have noted the ways in which it changed over time. Like the swastika, once a Native American sign of peace, it may have other origins, but the evolution of it over time has changed its meanings, harshly. To argue that its onetime context supersedes what has come since is both irresponsible and proof of a willful disregard to adapt, and to change.

Perhaps this is what lies at the center of the Washington Redskins debate. To change the team name, and for the devout Redskins fanbase to follow their franchise into a new era, would involve the tacit admission that the change was necessary, or at least inevitable, and that change and evolution were nigh.

And for many, particularly the older we get, this is a difficult process. To acknowledge that something like essentially calling your preferred football team the Bleeding Scalps is to acknowledge that you and others like you were in error in some way. In Mistakes Were Made (But Not By Me), author Elliot Aronson details the psychological difficulty of admitting when you’re wrong, a process that’s especially difficult when it comes to complicated subjects like historical racism. Aronson explains it as an issue of cognitive dissonance:

The engine that drives self-justification, the energy that produces the need to justify our actions and decisions—especially the wrong ones—is an unpleasant feeling that Festinger called ‘cognitive dissonance.’ Cognitive dissonance is a state of tension that occurs whenever a person holds two cognitions (ideas, attitudes, beliefs, opinions) that are psychologically inconsistent, such as ‘Smoking is a dumb thing to do because it could kill me” and ‘I smoke two packs a day.’ Dissonance produces mental discomfort, ranging from minor pangs to deep anguish; people don’t rest easy until they find a way to reduce it. In this example, the most direct way for a smoker to reduce dissonance is by quitting. But if she has tried to quit and failed, now she must reduce dissonance by convincing herself that smoking isn’t really so harmful, or that smoking is worth the risk because it helps her relax or prevents her from gaining weight (and after all, obesity is a health risk, too), and so on.

Although it might be heard to admit defeat, what Redskins defenders fail to understand is that there’s no charge demanding that the team’s fans give up all their mortal possessions and hang their heads in shame until time immemorial. They’re just being asked to evolve with the times—and to undo something that’s been a sustained blight on the NFL for some time. In psychology, rejecting that evolution is called “perserverance,” but in the case of the Redskins, clinging to that viewpoint is also enabling racism.

However, the fans, for the most part, seem to be on the same page as Holder. In response to Reid’s rally cry, Redskins management made the woefully ill-advised decision to stage a hashtag protest campaign, titled #RedskinsPride. And before Robin Thicke made terrible marketing choices a popular running joke, Snyder and company’s attempts to save face in the midst of increasing social pressure were torn asunder by the Internet.

Hey @Redskins and @HarryReid! To me #redskinspride is about normalizing overt racism in the 21st century. Did I do this right @Redskins ?

@daveweigel #redskinspride is pretending you have a great legacy while disregarding annual failures and, more importantly, social decency

Modern day belittling of genocide RT @Redskins: Tweet @SenatorReid to show your #RedskinsPride and tell him what the team means to you.

OK. RT @Redskins: Tweet @SenatorReid to show your #RedskinsPride and tell him what the team means to you. pic.twitter.com/L9DBy0KSVA

As fewer people find themselves defending the name by the day, it seems foolish to continue denying the inevitable for the sake of maintaining some archaic notion or another of a name that was once not racist and later became racist being acceptable in modern times. Doubly so in a time where things like the reactionary vitriol to #RedskinsPride can enter into prominence in a matter of hours. And now that the team is even losing patents on their logos over the general consensus that the name is wrong, it seems like it won’t be long before something has to give for the sake of the franchise continuing to function.

Holmes summarizes well the fallacy that the name somehow confers dignity: “The team has had the Redskins name since 1933, when it was based in Boston, so it’s easy to say, ‘We’ve always done it this way.’ But if America ‘always did it this way,’ then terms like ‘Wetback,’ ‘Negro,’ and its much uglier cousin would still be a part of our lexicon. We learn.” This isn’t to suggest that supporters of the team are suddenly overprivileged monsters, but simply that time has changed how the world looks on their team. And if the franchise refuses to evolve with it, the scrutiny is only going to intensify, particularly as the season approaches, bringing a new and intensified round of media attention with it.

Photo via Matthew Straubmuller/Flickr (CC BY 2.0)